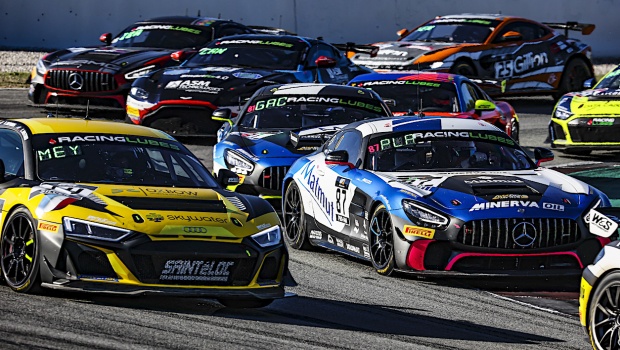 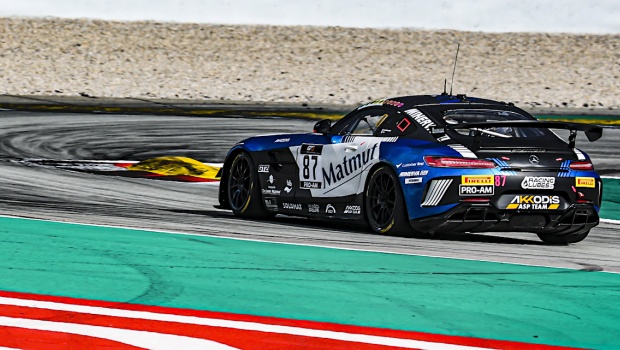 Arriving in Spain, the Akkodis ASP Team duo, Jean-Luc Beaubelique and Jim Pla had three Pro-AM victories on their counter and three second places, having a comfortable 34 point lead at the front of the championship. The way things were set up, it would be possible to take the title as of the first race. After missing Hockenheim, Barcelona saw the return on track of Simon Gachet and Eric Debard (#81) on board of the second Pro-AM car.

In the AM category, Mauro Ricci (#61) benefitted of a new teammate for this race, Fabien Barthez, coming by to fill in for Benjamin Ricci, who had business elsewhere. During the second race at Hockenheim, Benjamin had to run off for a ‘happy reason’, and Mauro was authorised to run solo. This explains the offset in the championship’s general standings, leaving Mauro alone in second place, 5 points from the leaders. After their podium at Hockenheim in Race 2, Pascal Gibon and Christophe Bourret (#53) wanted a repeat on this track that alternates slow corners, fast curves and straights.

The first free practice sessions allowed for an assessment of the competition and to decide on the first setups. In both sessions, the duo of Simon Gachet – Eric Debard (#81) went quickest in the team, successively P5 and P2 Pro-AM. Jim Pla and Jean-Luc Beaubelique (#87) were P9 and P4 in the category. In the AM class, Fabien Barthez and Mauro Ricci (#61) were in the Top 5 (then P8). Pascal Gibon and Christophe Bourret (#61) were P12 and P10.

In the qualifying sessions, the weather was optimal but the first session was interrupted by a red flag that only left five minutes to set the ultimate lap time. Simon Gachet was quickest for the Akkodis ASP Team clan, P10 overall (P6 Pro-AM). Unfortunately, Jim Pla (#87) wasn’t having much luck, suffering issues with his suspension, he finished the session P18 (P8 Pro-AM). In the AM category, Fabien Barthez (#61) entered into the Top 5 (P35 overall), while Pascal Gibon (#53) set the 11th best time.

In the second session, the situation didn’t improve much. Once more, the crew of the #81 went fasted, with the 12th time in Pro-AM for Eric Debard (P32 overall). Jean-Luc Beaubelique (#87) handicapped by a faulty suspension finished P16 Pro-AM (P39 overall). In AM, Christophe Bourret (#53) was P11 AM, just ahead of Mauro Ricci (#61) P44 overall. 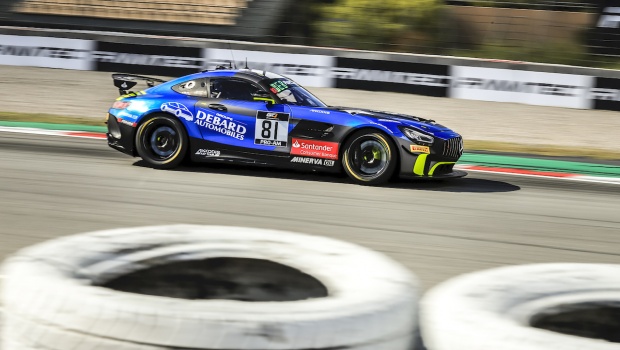 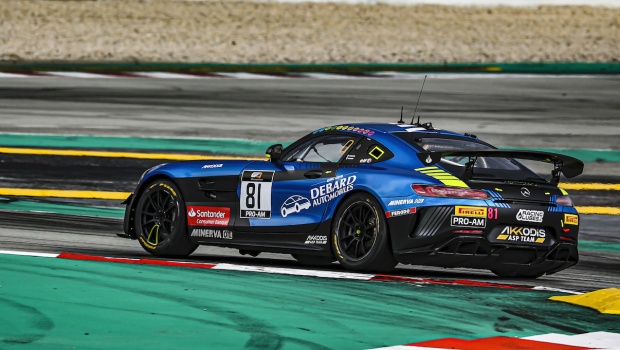 Race 1 – the chase for the titles is still open!

The first race took place Saturday afternoon. The sun was still very much present and the ambient temperature was 23°C. Meanwhile, the track was much warmer (36°C) which would call for a prudent management of the tyres.

As of the start, Jim Pla (#87) set the tone by passing from P18 on the grid to P9 at the end of the first lap, placing himself just ahead of his teammate, Simon Gachet (#81). In AM, Fabien Barthey (#61) was pushed around and lost 5 positions. Christophe Bourret (#53), left last on the grid after a penalty (loss of good behaviour points) and a 5 place penalty, improved by three places.

The race promised to be very competitive and the pace was getting faster and faster, both at the front and in the pack. After the first period of Full Course Yellow (FCY), after fewer than 10’ of racing, Jim Pla (#87) continued his climb, P7 (P6 Pro-AM), Simon Gachet (#81) right behind him. Fabien Barthez (#61) pushed on the gas and ended up P8 AM (P37 overall) and Christophe Bourret P11.

At the end of the second FCY period, no big changes, but Jim Pla was a bit stuck behind the #8.

The third FCY set the pace for the final sprint. Pascal Gibon continued his way up the field and found himself P7 AM, right ahead of Mauro Ricci.

But with less than 3 minutes from the end, Jean-Luc Beaubelique was caught in a collision, went via the gravel bed and returned to the track. He was P12 Pro-AM (P27 overall) and for the first time this season, outside of the points. Nevertheless, with a lead of ‘only’ 21 points in the championship, the final race will decide its champion.

At the end of a regular and efficient stint, Eric Debard (#81) crossed the line P16 (P8 Pro-AM). It was also a great performance for Pascal Gibon (#53) who crossed the flag P6 AM (P33 overall). Finishing P10 AM, even though there is still some hope for Mauro Ricci (#61) for his quest to take the title, he’s now 14 points off the leaders… 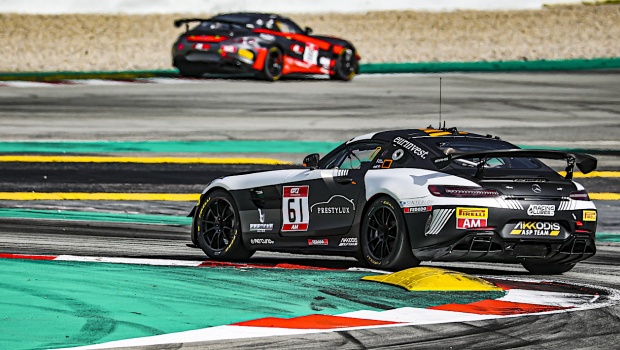 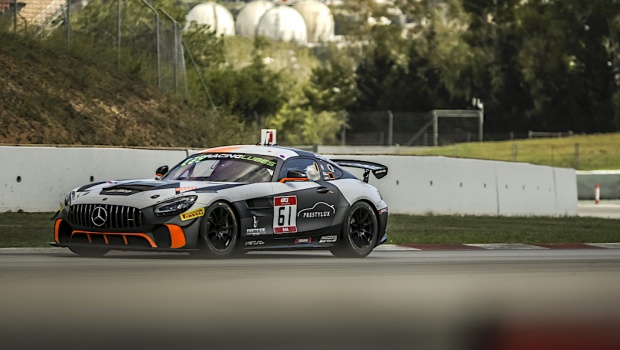 Race 2 – The titles at the end of the safety car session!

All the ingredients were present to make the 2022 finale magnificent. The sun was shining, the sky was clear and the competitors were especially motivated for the final fireworks. When the lights went green, spirits were high…and after a few corners, a first collision caused chaos. Full Course Yellow, then the safety-car and two more collisions. At the end of this first lap, six cars were out, including the AM championship leader. The four Akkodis ASP Team cars were intact: P17 (P6 Pro-AM) for Eric Debard (#81), P32 (P7 AM) for Pascal Gibon (#53), P33 (P8 AM) for Mauro Ricci (#61) and P36 (P16 Pro-AM) for Jean Luc Beaubelique (#87). After more than 30’ under safety car to clean and clear the track, the race director waved the red flag and authorised the driver changes in the pitlane.

The race restarted for a 13’ sprint. Jim Pla (#87) only had one goal, regaining positions. He quickly overtook his teammates Fabien Barthez (#61) and Christophe Bourret (#53) while Simon Gachet (#81) P15 overall, was not lagging either. Two more FCY (and a few cars going off track) set the pace for the last few minutes. As he crossed the finish, Simon Gachet had climbed up to P6 Pro-AM, while Jim Pla, despite his efforts, was not able to enter into the points. Christophe Bourret was P7 AM and Fabien Barthez P9.

In the end, Jean-Luc Beaubelique and Jim Pla took the 2022 Pro-AM title, as did Akkodis ASP Team for the team classification. In AM, Mauro Ricci was vice champion, finishing 13 points from the leaders, but the Team managed to take the team title.

Four titles were in reach, three were won. It was a good harvest for Jérôme Policand and his crew. 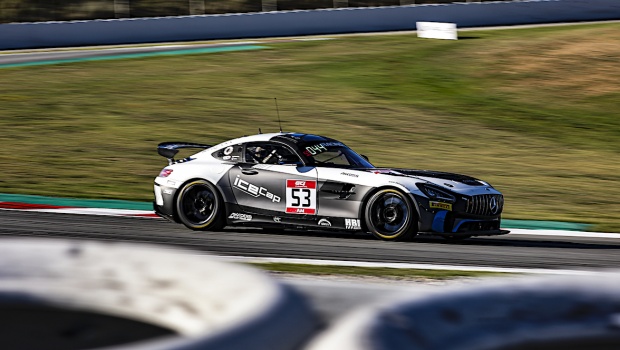 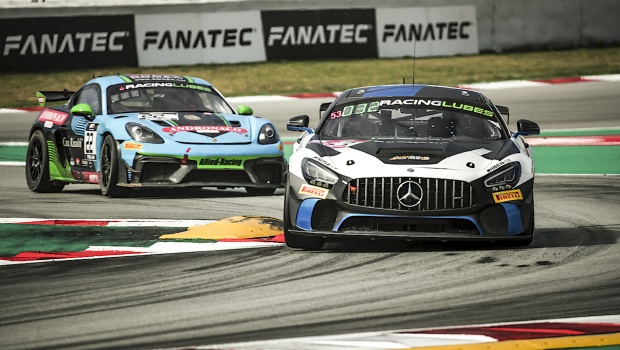