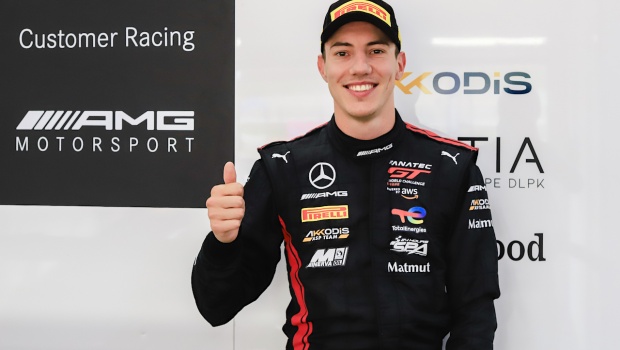 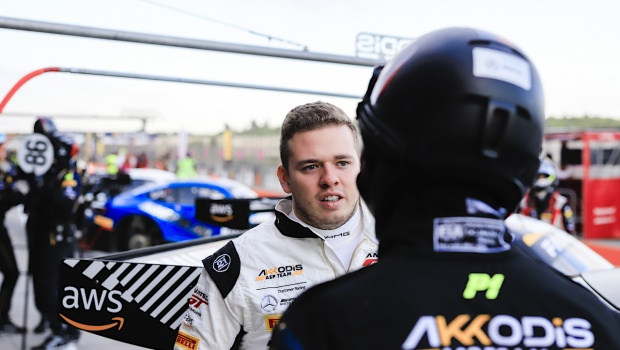 For the final round of the Sprint Cup, Akkodis ASP Team had to change the line-up of the #88, with Tristan Vautier joining Jim Pla for the occasion. Jules Gounon had to declare forfeit, having hurt his back during the IMSA race at the VIRginia International Raceway a few weeks earlier. Two small fractures to his vertebra had been detected, forcing Jules to rest. The whole Akkodis ASP Team wishes him a speedy recovery.

In Valencia, Akkodis ASP Team could claim several titles, those for drivers and team in Sprint, but also the overall (Sprint + Endurance) title for drivers.

As of the free practice sessions, Lello Marciello showed off his talent and motivation by setting the best time. In this decisive round for the Sprint title, the Swiss driver gave the crew confidence on this fairly technical 4 km circuit. But the competition was tight and the direct opponents were quite close. Jim Pla and Tristan Vautier (#88) set the 7th best time, while in the #87, Thomas Drouet and Casper Stevenson were sixth in Silver Cup. In the #86, Igor Walilko and Petru Umbrarescu were P8. 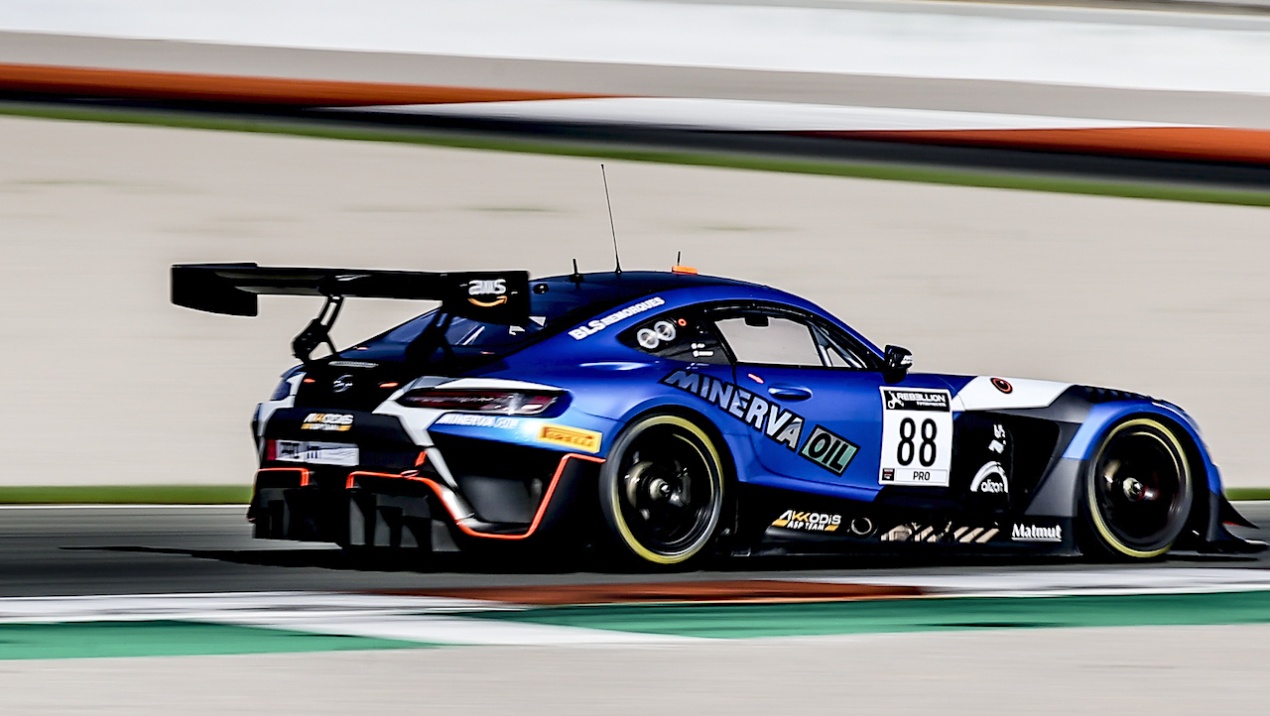 Things got more complicated when it came time for the pre-qualifying session. The #89 of the title contenders finished eighth overall, 0.442 seconds off the leader. The #88 of Jim Pla and Tristan Vautier were P11 Pro Cup. In the Silver Cup, Casper Stevenson was second by 0.024s in the #87 (6th overall), which he shared with Thomas Drouet. Igor Walilko and Petru Umbrarescu (#86) finished in the Silver Top 7.

The first qualifying session didn’t really calm their nerves. The best classified Akkodis ASP Team car was Jim Pla (#88) who placed himself in a great 5th place. The #87 of Casper Stevenson was 11th and P4 Silver. Timur Boguslavskiy (#89) was only 16th in the #87, Petru Umbrarescu was 18th (P8 Silver). 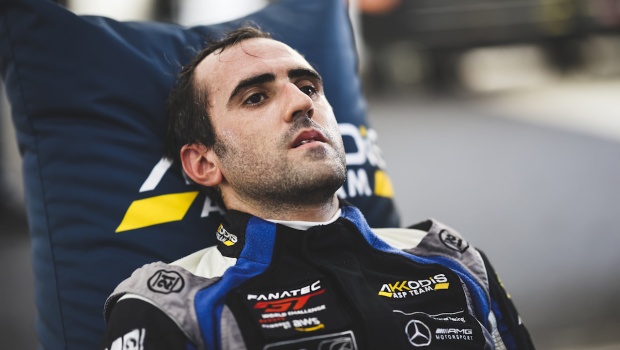 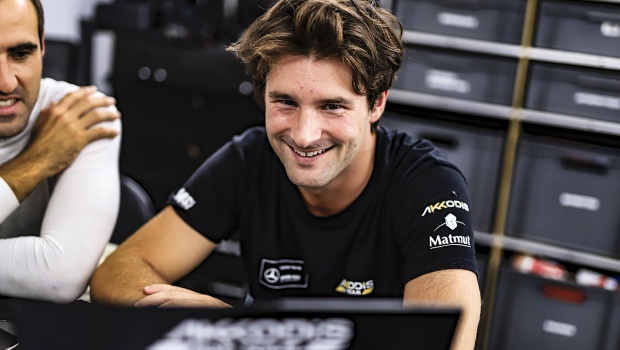 The following day, the tone changed in Q2. Leading in the session from start to finish, Raffaele Marciello (#89) claimed the final Sprint pole for 2022 with 1m30.845s, his fourth out of five Sprint qualifying sessions. Thomas Drouet, very consistent, took the 2nd time in the Silver Cup (P14 overall), and Igor Walilko was 5th (P20). After several cancelled lap times for track limits, Tristan Vautier (#88) finished P19. 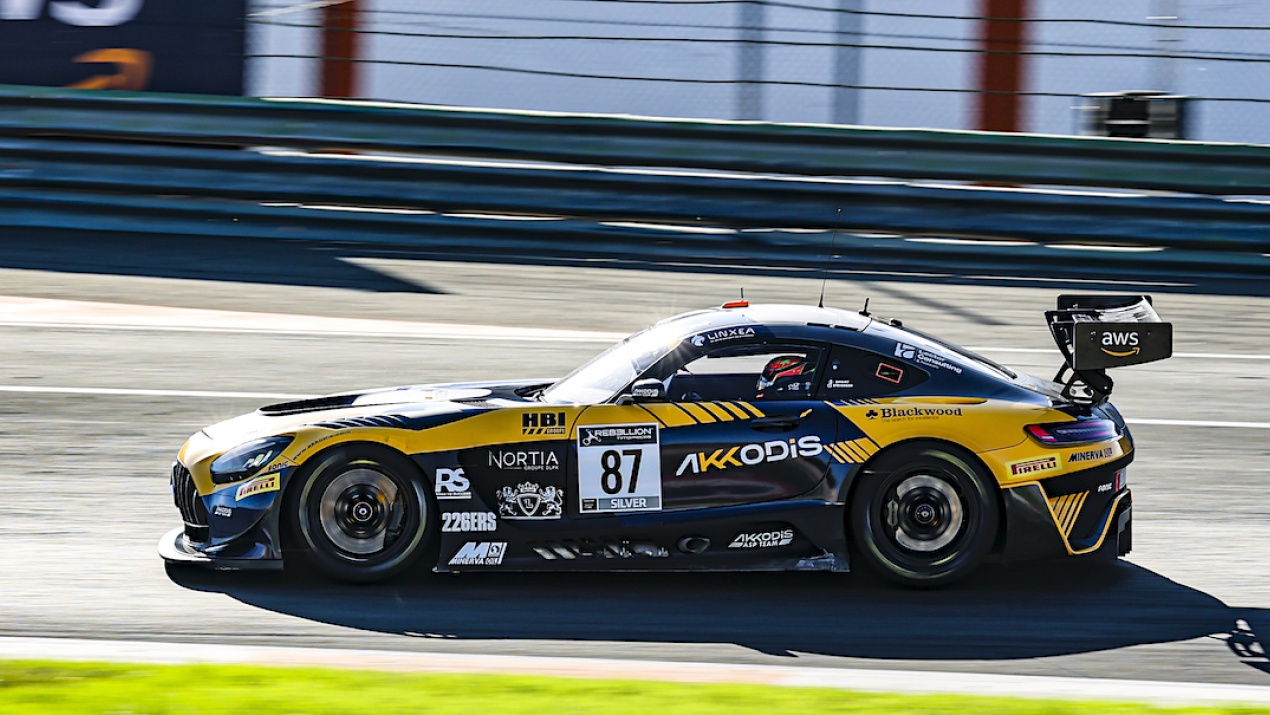 Many spectators made the trip for the final round of the Sprint Cup, and the atmosphere was ‘caliente’ in the paddock. With 26 cars on the grid, and with sunshine and warm weather, all the ingredients were there.

There were a few changes made to the grid. Jim Pla (#88) would start from P5 as intended, but Casper Stevenson was penalised by 5 places after losing driving standard points at the previous round (the penalty having been set for the following race). Timur Boguslavskiy dropped three places (P19) for having slowed down in Q1 in front of the #188, and so Petru Umbrarescu suddenly found himself P16. 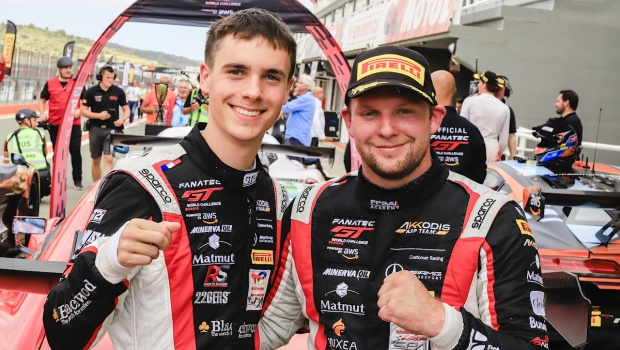 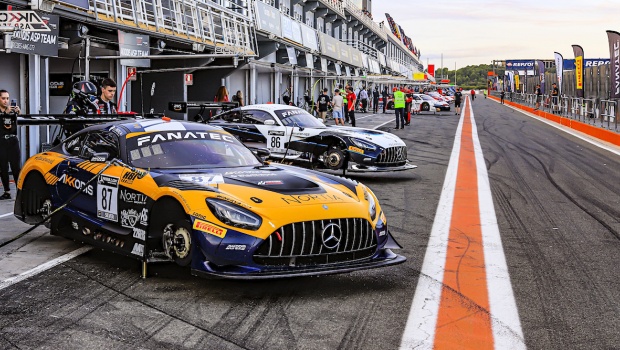 The first race got off to a flying start, before being interrupted by a safety car, just three minutes after going green. The restart took place without any issues, but after five minutes, Petru Umbrarescu (#86) was hit by a Porsche that knocked him into a spin. The Mercedes-AMG headed back onto the track, but was damaged, and forced to head back to the pits. They retired a few laps later.

At the front, Jim Pla (#88), still P5, did a perfect stint without ever releasing the pressure, racing within a small peloton chasing the leader. Having started P15, Casper Stevenson (#87) was especially efficient and precise in his attacks and made it into the Top 10. Timur Boguslavskiy (#89) regained a few positions and finished his stint P16. 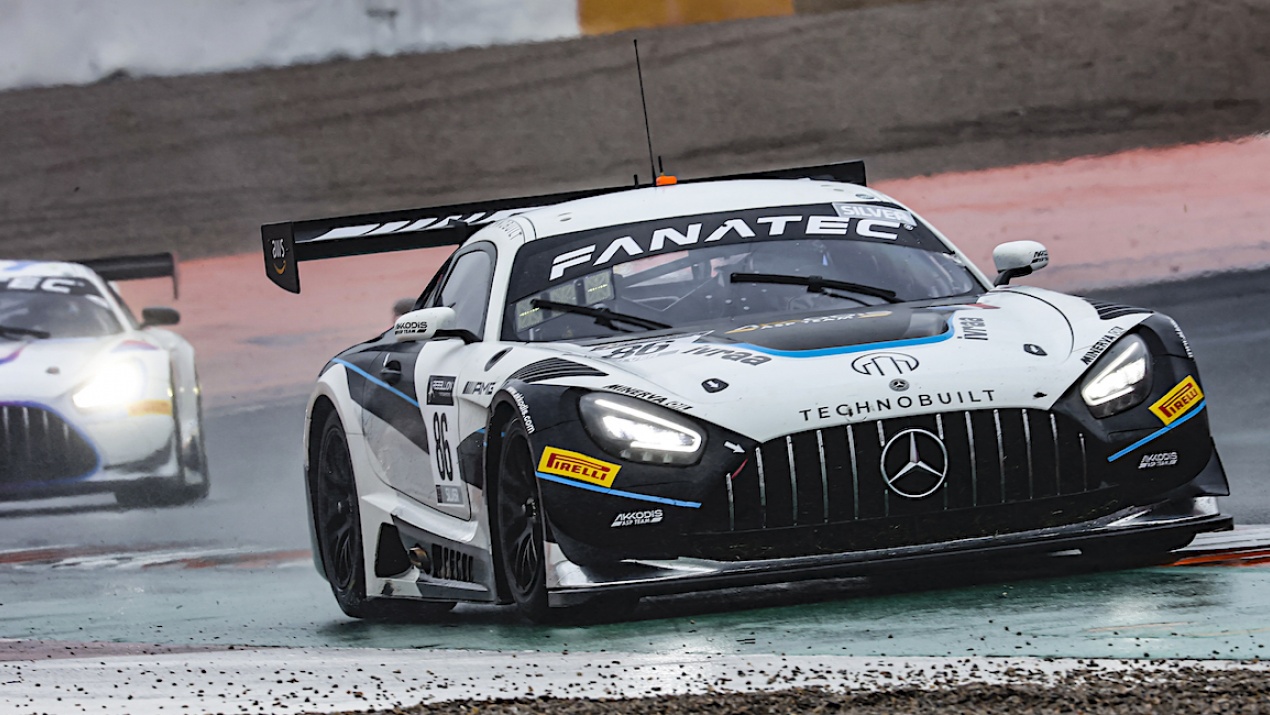 At the driver change, the pace increased a notch. For the #89 as for the #32, the title was at stake. Raffaele Marciello was not going to be a mere bystander and was just outside the top 10 at the beginning of the stint. Thomas Drouet (#87) went for it and was sitting P8. But with 24’ to go, Tristan Vautier was victim of a contact with a McLaren and went into a spin. He joined back in 15th place and held onto the position until the end.

A Full Course Yellow (followed by a safety-car) was deployed with 20 minutes to go. The last quarter of an hour unfolded at a breakneck pace. With a superb manoeuvre, Lello overtook the #25 Audi 3’ from the finish and claimed two more places. Finishing P7, the Swiss saw all hope of taking the title go out the window. The crew of the #89 would be vice-champion. Thomas Drouet (#87) finished P3 Silver, and gave the team another podium. 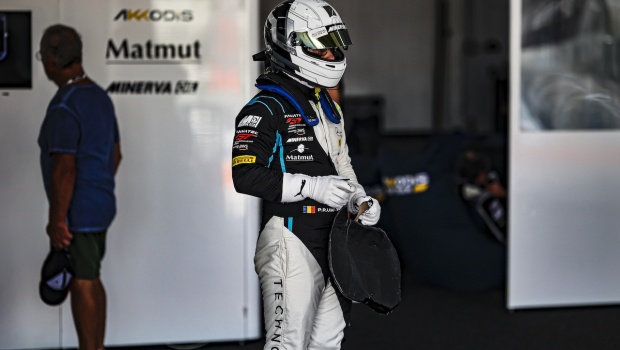 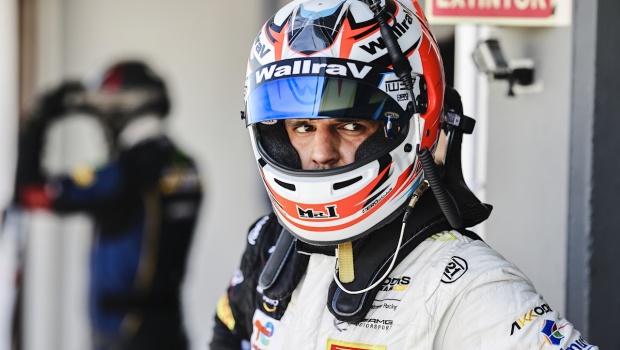 The conditions for this second race were quite different to that of the previous day. It rained right until the start and the track was soaked. Everyone was on wet tyres, for the first time of the season!

After two formation laps behind the leading car, the pole sitter, Raffaele Marciello (#89) was determined to not hang around. Ahead of him, the track was clear and he made the most of it to very quickly create a significant gap over his rivals caught in the water spray. Visibility was poor in the pack, and trajectories were sometimes difficult to follow. At the end of this first stint, Lello had pulled away with a lead of more than 20 seconds, Thomas Drouet was P17 (P5 Silver), Tristan Vautier in the #88 (after a contact with the #21) was P22, and Igor Walilko P24 (P8 Silver) in the #86.

The pit stops then proved to be decisive for the outcome of the race. The track was still tricky and slippery, Akkodis ASP Team and Sainteloc decided to head back out on wets, while WRT chose slicks.

The #32 Audi was a bit behind, and the #25 Audi lost time in the pits, Timur Boguslavskiy (#89) could count on a comfortable 25 second lead. But the #25 was very quick and was gaining two to three seconds a lap on the Mercedes-AMG, slowly eating away at the precious gap. 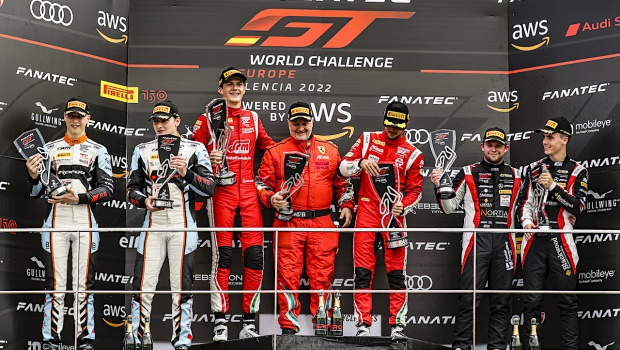 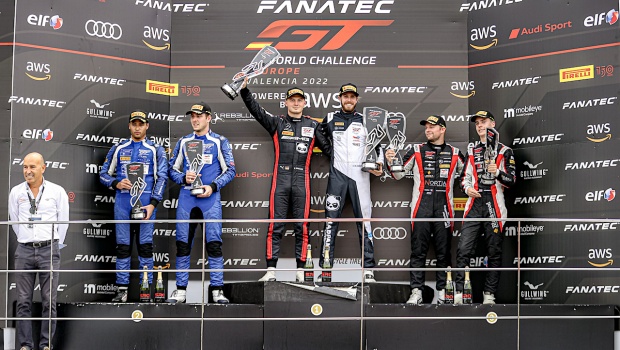 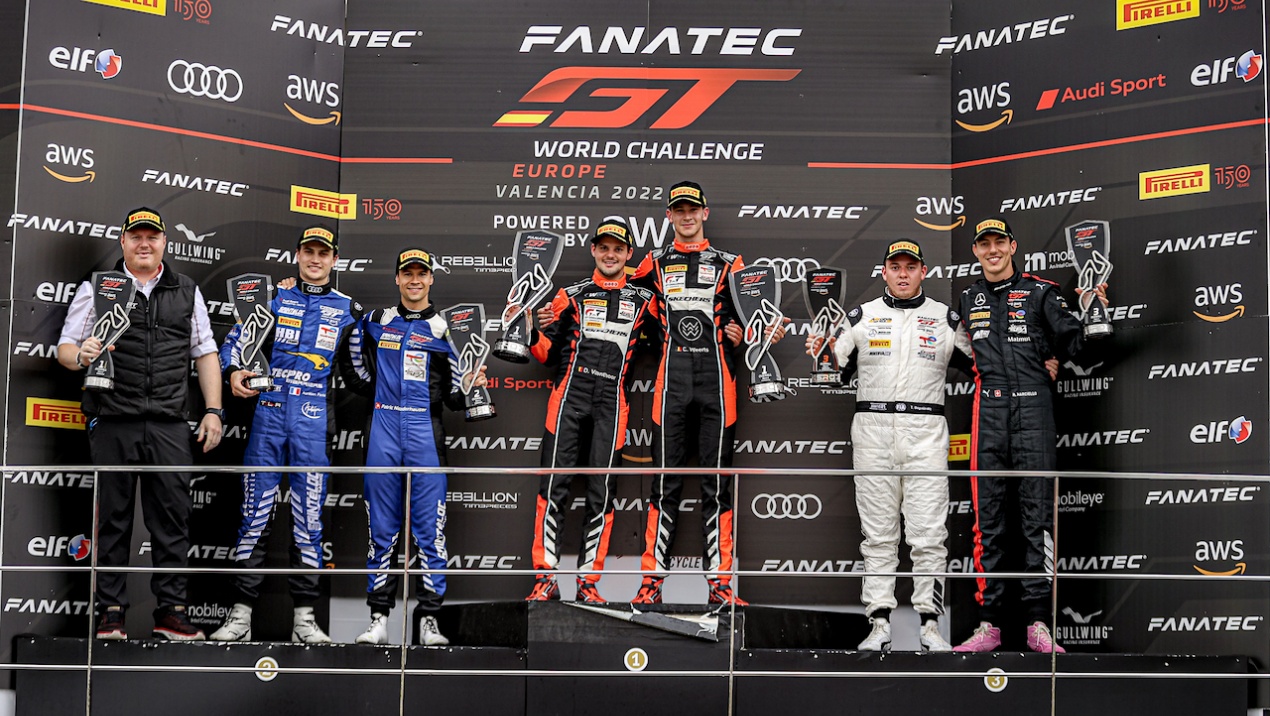