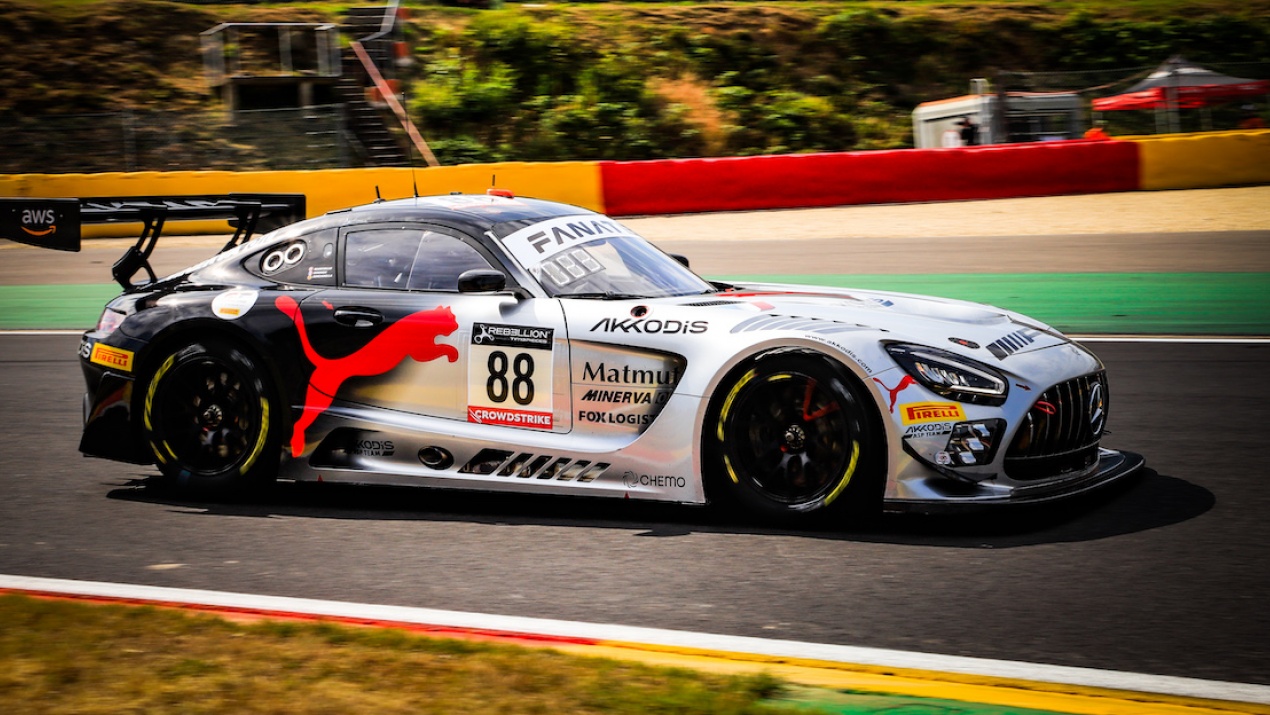 Taking part in the 24 Hours of Spa is no ordinary experience, as much for the sporting challenge and its demands as for the atmosphere that accompanies this event. This year, in addition to celebrating the return of the public after two years of pandemic, notably during the famous Parade in the centre of Spa, the sporting performance also took on a new lease of life.

In fact, the drivers needed some time to adapt, mainly to master the new track limits, punctuated by brand new gravel beds. The track has actually seen quite a few developments during the winter so as to gain the double homologation, car and motorbike, which meant the return of the gravel beds, specific to motorbike races in certain strategic locations. This means that for the cars, any deviation off the track is now quickly penalised. 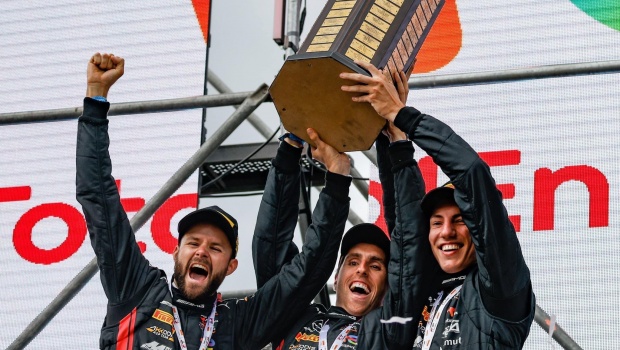 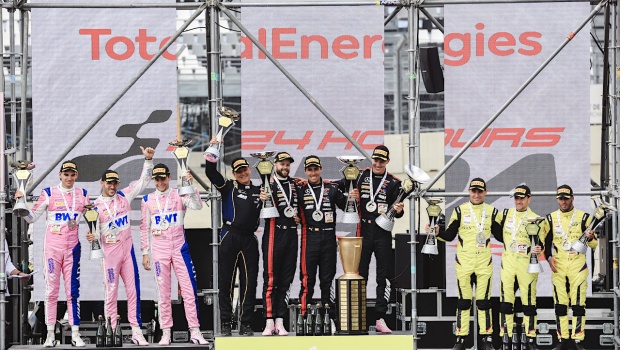 In the Akkodis ASP Team, the two cars normally entered in the Endurance Cup made the journey to Spa, in search of that elusive Holy Grail for any GT driver that a victory in Spa represents. In the #88, Raffaele Marciello (poleman of the last two editions), Dani Juncadella and Jules Gounon feature among the candidates for the overall victory. In the Silver Cup category, Casper Stevenson, Thomas Drouet and Tommaso Mosca were counting on making an impression in the #87.

The free practice sessions allowed the team to establish a first contact with the track, and so as to confirm the difficulty in adapting to the new trajectories, the session was interrupted four times by a red flag. The #88 Mercedes-AMG finished P7 overall (P3 Pro), while the #87 set the 2nd time in Silver (P18 overall). 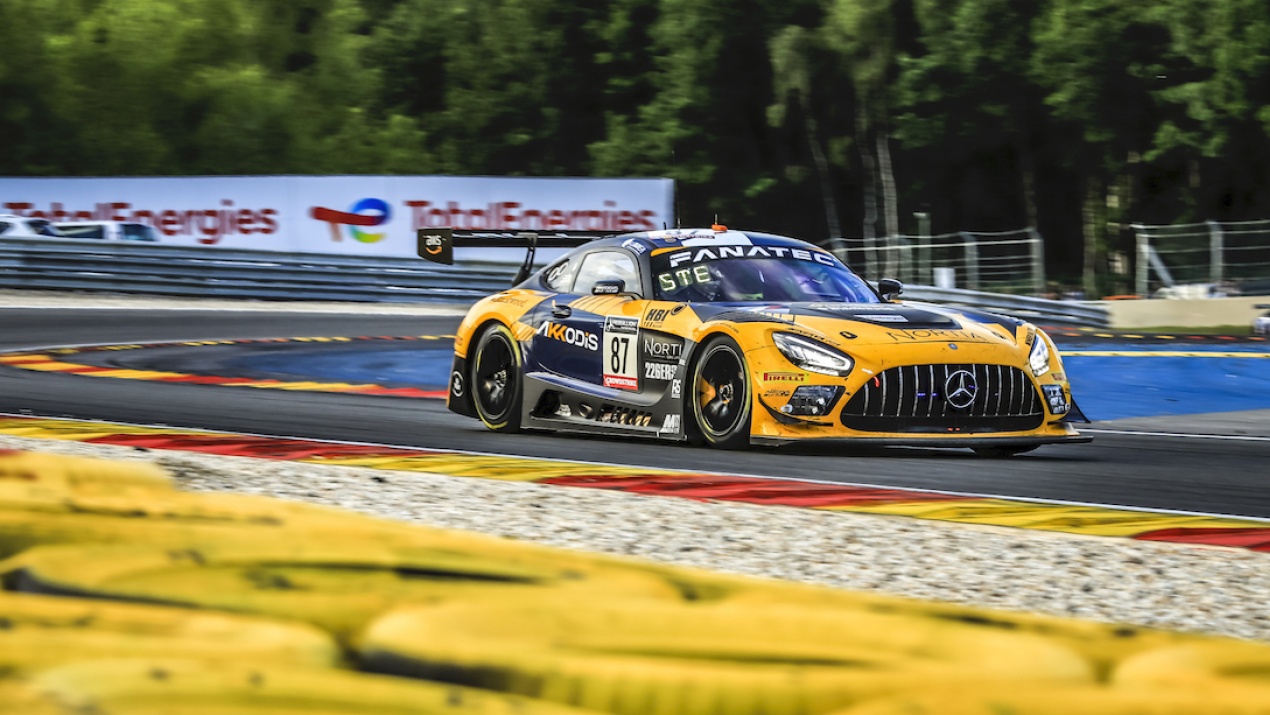 With 66 cars on track, the qualifying sessions were just as tumultuous to find a clean lap. There were many laps cancelled due to not respecting the track limits, as well as quite a few red flags. The average time of the three drivers allows the crew of the #88 to place themselves 9th overall and so make it through to Super Pole, which is reserved for the 20 best averages. In the Silver Cup, the trio of the #87 set the 4th best time in the category but 24th overall, meaning that they did not make it through to the Super Pole. They would start from the 12th row on the grid.

When it was time for the Super Pole, everyone was holding their breath. Raffaele Marciello was at the wheel of the #88 and as expected, set a great time. Despite the cancellation of his first lap for having gone over the track limits, his second attempt was good, with an absolutely crazy time in the middle sector, putting the Swiss to the lead with a lap of 2m16.375s. The five following cars were not able to beat him, until the #6 Lamborghini of Andrea Caldarelli that managed to set a new qualifying record in GT3 with a time of 2m16.221s.

But the following day, the #6 Lamborghini saw its times in the Super Pole cancelled for a technical infraction, Raffaele Marciello (#88) became for the third consecutive time the poleman of the 24 Hours of Spa. 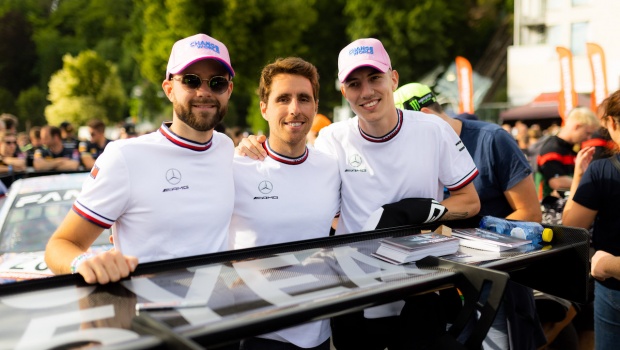 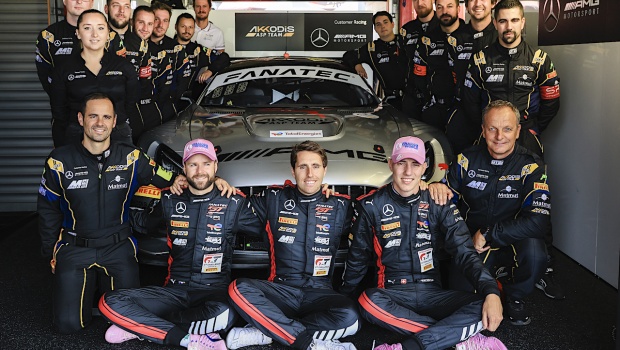 Saturday at 16h45, with great weather and in front of thousands of fans, the 74th edition of the 24 Hours of Spa got underway. The #54 Porsche overtook the poleman pretty quickly, Raffaele Marciello at the wheel for the first stint. As if to ward off bad luck, the Swiss driver did not put up a great resistance but also did not let the leader get away. It was time for double stints in the #88 and 24 Hours on the Ardennes rollercoaster.

In the #87, Tommaso Mosca took a great start and made a leap in the classification by going from 23rd to 15th position (P3 Silver). After one hour on track, Tommaso handed the wheel over to Casper Stevenson, but 30 minutes later, the car returned to the pits for a technical problem (transmission). When the #87 rejoined the track, six laps had gone by. It was looking complicated to get back in the game. 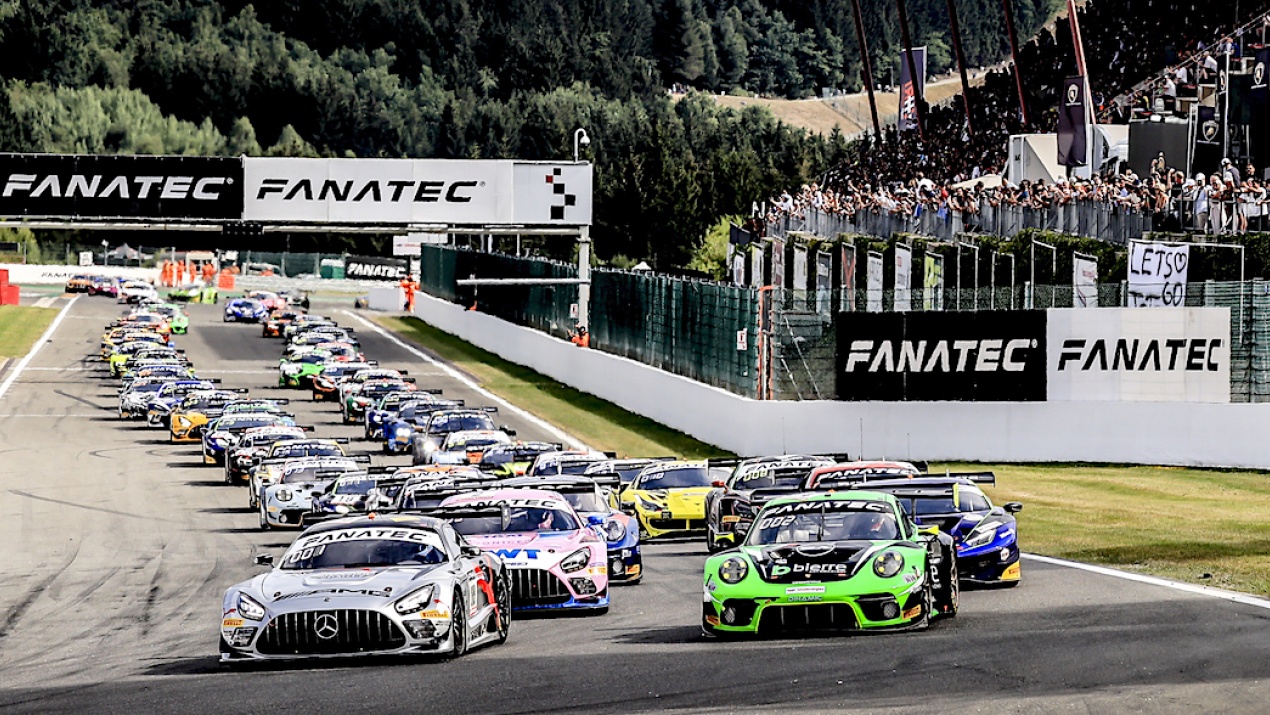 As the laps went by, different strategies became visible, evolving hour by hour, following the pace of the Full Course Yellows and Safety Cars. The #88 made progress at the front, between the leader and the Top 5, the crew making sure to keep up a sustained and regular pace (sometimes making it look like a sprint race).

The race was sprinkled with incidents that were more or less serious, sending out a few of the favourites. In the night, one rather violent crash (but with no gravity for the driver) required repairs to the safety barrier. The red flag was presented and the race was interrupted for a bit more than 40 minutes. The #88 confirmed itself as a serious candidate for the victory and adapted its schedule to the events in order not to be left behind. Lap by lap, Lello Marciello, Dani Juncadella and Jules Gounon were doing double stints, keeping the competition at bay. Raffaele Marciello was able to extend his lead, but this advantage was reduced to nothing when a new period of Full Course Yellow appeared. In the early hours of the morning, Dani Juncadella pulled out all the stops to make up the gap and put in a string of fastest laps. But each time, a neutralisation meant that the strategy had to be adapted to lose as little time as possible. 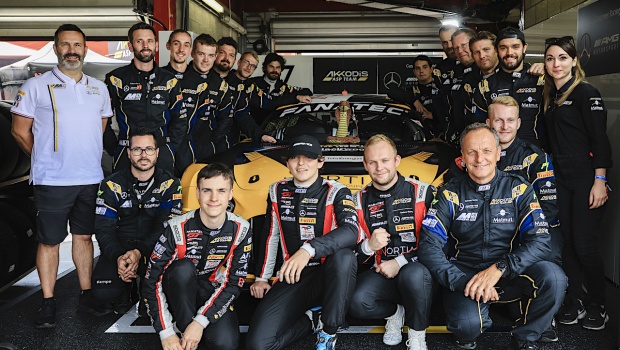 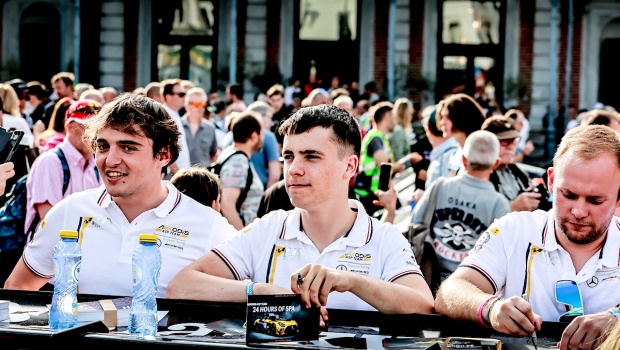 In the Silver Cup, the team did not lose out despite the six handicap laps and made a great effort to climb back up the class ranking. Casper Stevenson, Thomas Drouet and Tommaso Mosca did not give up and climbed back into the points, up to 9th place. Unfortunately, shortly after a safety car period, with just over 6 hours remaining in the race, the #87 and the #74 Porsche touched each other during an overtake. The #87 was damaged but managed to get back to the pits. Unfortunately, the race was over. 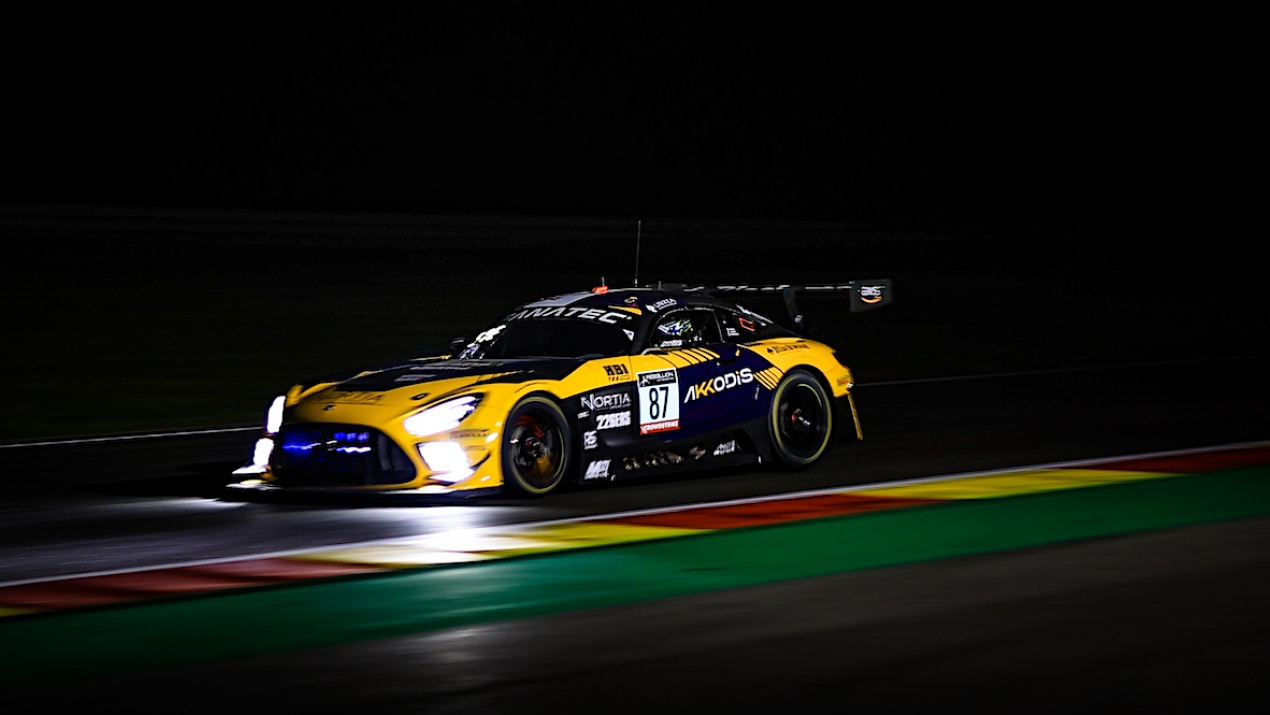 Among the big frights of this 74th edition, Jules Gounon had a first one four hours from the flag. The #88 Mercedes-AMG was pushed into a spin by the #93 driven by Jonathan Hui. The latter wanted to rejoin the pits and crossed Jules’ trajectory without being able to avoid the contact (he eventually got a penalty for his mistake). A bit later, Jules once more had a fright going right up close to Nicki Thiim (#95) in Eau Rouge. Gounon seemed to have taken the advantage in the Raidillon, but Thiim didn’t lift and touched the Mercedes-AMG lightly. The #88 did not suffer from this contact, but the #95 had to go through the pits after spinning right on the track.

The end of the race was a duel with the #2 Mercedes-AMG, but Raffaele Marciello did not make any mistakes and crossed the line as victor. Finally, the German make took home a wonderful 1-2 win.

At the end of 24 intense hours, Akkodis ASP Team can breathe and be happy. Jérôme Policand has beat the curse while proving that you can indeed win the 24 Hours of Spa from the Endurance garages. 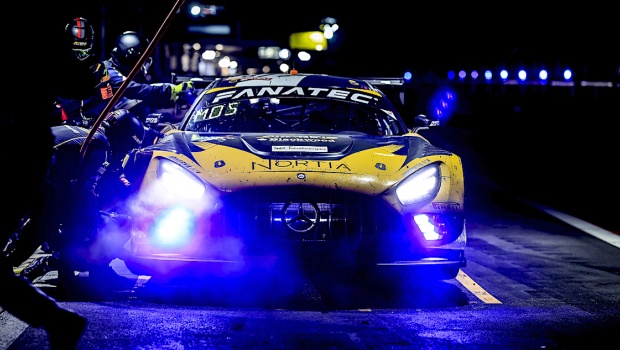 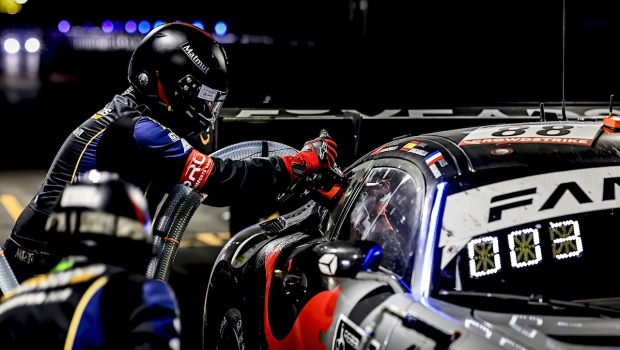 The crew of the #88 and the Team are leading the classification of the Fanatec GT World Endurance Cup. Raffaele Marciello is still leading the overall classification (Sprint + Endurance) as is Akkodis ASP Team. Next stop – Hockenheim, on the 3rd and 4th of September. 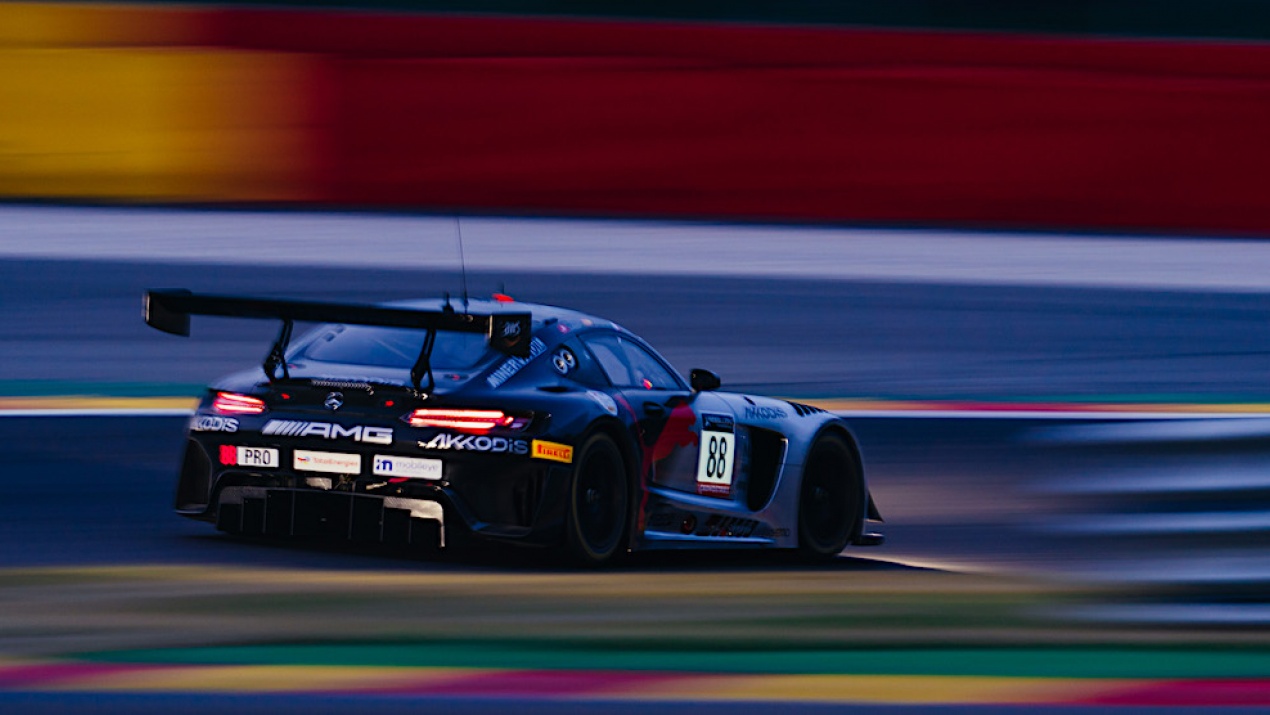