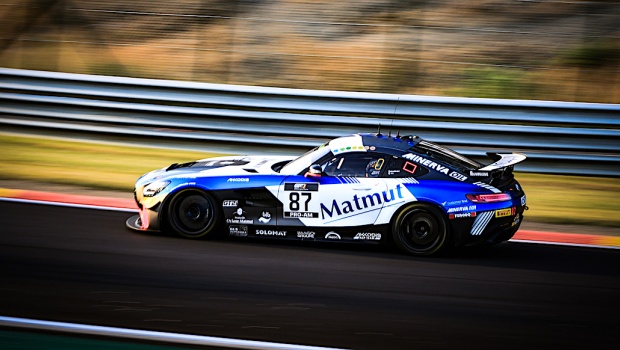 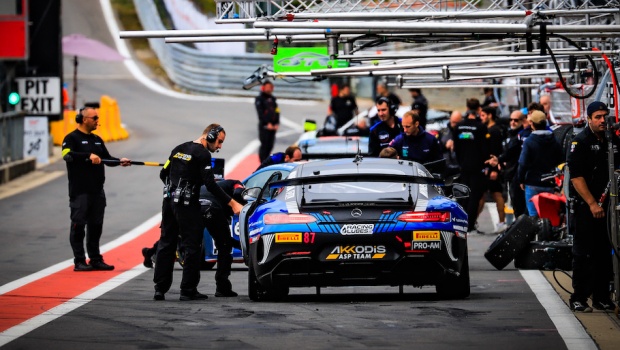 Spa-Francorchamps does not have a reputation of being an easy circuit, and over the 7km track in the heart of the Belgian Ardennes, anything can happen. And did. The first free practice session was cancelled after a violent crash in the first minutes that caused major material damage to the rails. So there was only one free practice session left to allow the drivers to take their marks on a layout that has seen quite a few changes over the winter, namely with the return of gravel traps in strategic locations.

It was an ideal temperature of 23°C for the qualifying sessions. The first session, interrupted with 3’30 to go after a crash, allowed Simon Gachet (#81) to set the second best time in Pro-AM and overall. Disrupted by electrical troubles, Jim Pla (#87) had to be content with the 9th time in Pro-AM. Benjamin Ricci (#61) was in the Top 5 AM (P35) and Christophe Bourret (#53) P12 in the category. 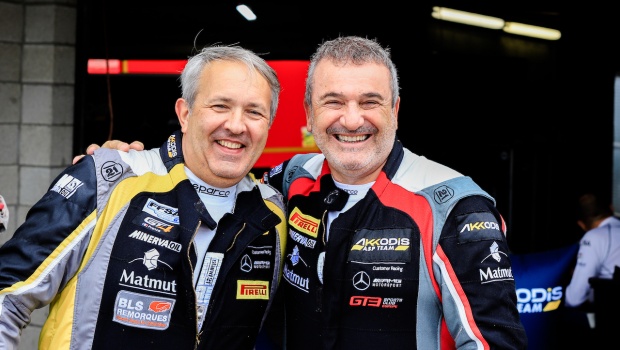 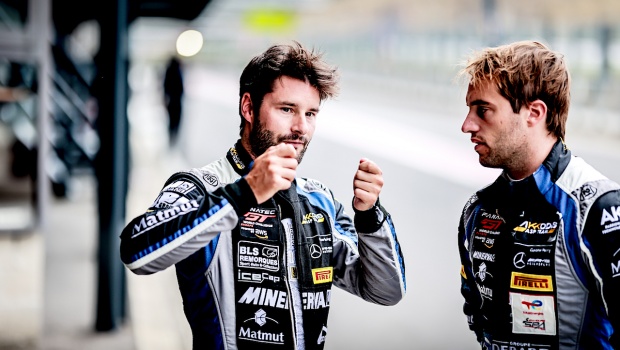 The second session was also interrupted for several minutes by a red flag with 15’ to go, and was more complicated for Akkodis ASP Team. In fact, the #87 was still suffering from electrical issues and could only complete one lap, which forced them to have to start from the back of the grid in Race 2. Eric Debard (#81) set the 12th time in Pro-AM, Mauro Ricci (#61) 9th in AM and Pascal Gibon (#53) 10th. 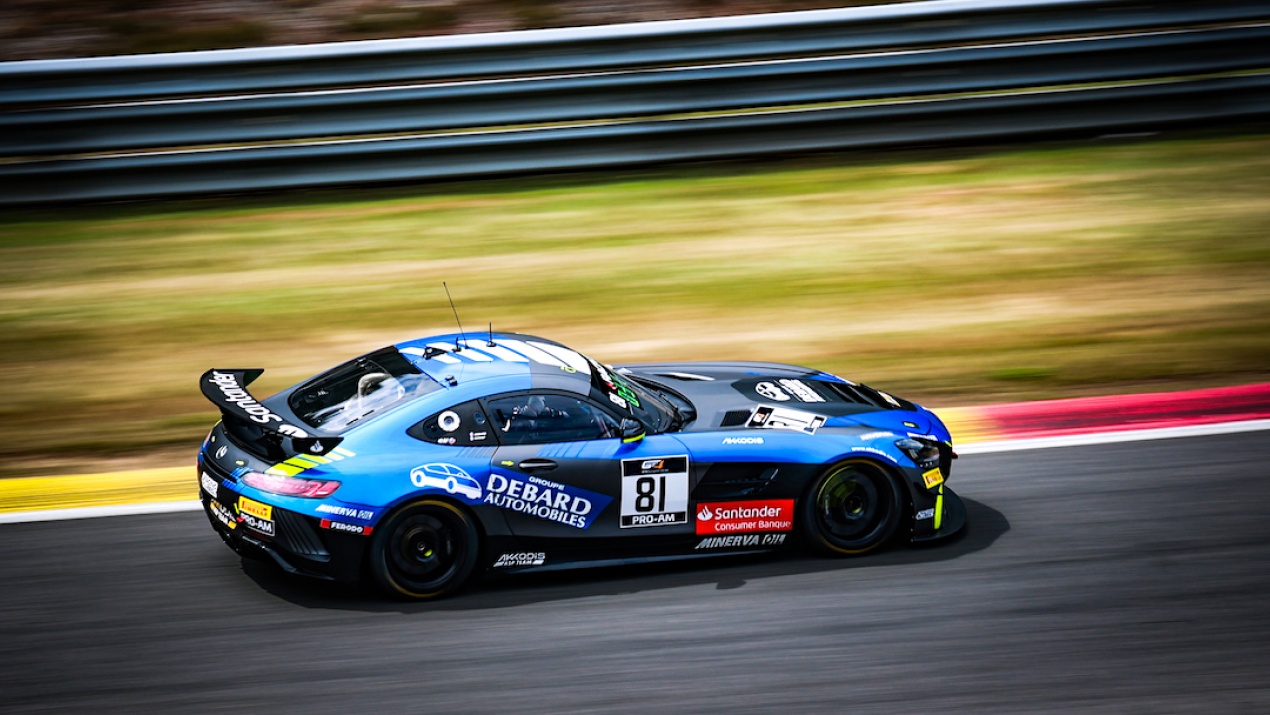 Race 1 – The #87 held onto their championship lead

Although he had set the second best time, Simon Gachet had to start from 6th place. This was due to having gone too fast in the pitlane during Q2, which also gave Eric Debard 3 Behaviour Warning Points. Eric Debard did the mistake but the whole crew was penalized.  Jim Pla for his part was at the back of the grid, the #87 having been penalised for changing their battery at the end of Q1 (to resolve their electronical issues), and all the times before the change were cancelled.

The start of this first race was very impressive with a field of 54 cars. Simon Gachet threw himself into the fight and took quickly one, then three positions. There were a few contacts in the field that animated the fights, while Jim Pla (#87) was already in warrior mode, having gone from 53rd to 35th place in two laps! Benjamin Ricci (#61) held onto their 4th place in AM and Christophe Bourret (#53) navigated in the Top 12. 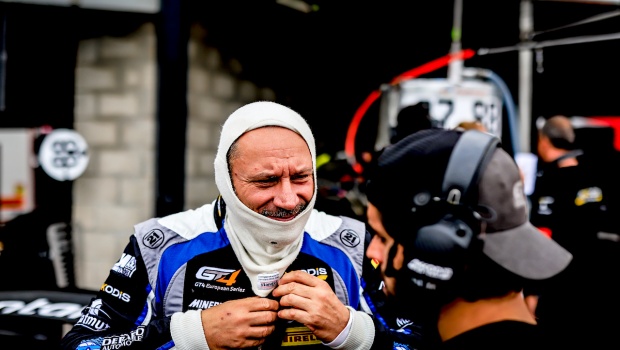 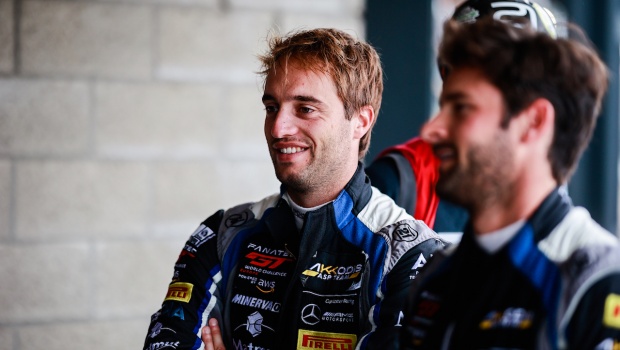 Ten minutes after the start, a first Full Course Yellow (FCY) came to interrupt all progress in the classification; Simon Gachet was P3 and Jim Pla P11 Pro-AM (P29 overall). Less than 9 minutes later, the green flag relaunched the race. A second FCY was presented but was very brief; Simon Gachet (#81) was surprised at the restart and lost two places. In the relaunch, Jim Pla was P25 (P9 Pro-AM, so in the points) while in the AM category, the situation had not changed. After the driver change, Eric Debard (#81) came out in the lead, then was overtaken to fall to 5th position. Jean-Luc Beaubelique (#87) was 13th, Mauro Ricci (#51) still in the AM Top 5, and Pascal Gibon (#53) in the Top 10. As the laps went by, the positions changed around in the middle of a field of hot heads.

As the chequered flag dropped, Jean-Luc Beaubelique finished in a very nice 4th place in Pro-AM (P17 overall) allowing the team of the #87 to hold onto the lead of the championship. It was a dazzling progression up from 53rd place on the grid. Eric Debard (#81) crossed the line just behind his teammate (P5 Pro-AM). Mauro Ricci (#61) was P7 AM and Pascal Gibon finished in the Top 10. 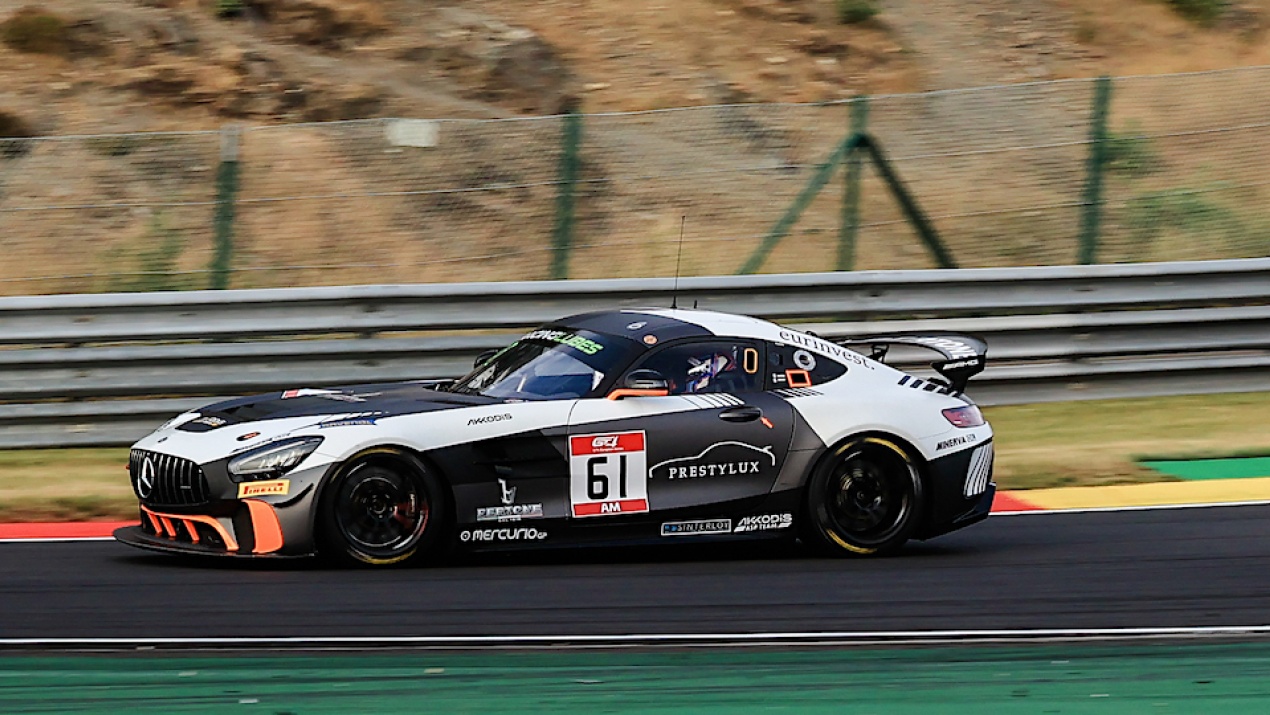 Race 2 – Two podiums (Pro-AM and AM) in the Ardennes

The start of the second race was just as complicated as the first for Jean-Luc Beaubelique (#87), having to start from the back of the grid, while Eric Debard was on the 19th row. Mauro Ricci (#61) was two rows behind, just ahead of Pascal Gibon (#53).

At the start, an incident involving 8 cars occurred at the funnel of la Source. The Safety-Car went into action immediately. For 21 minutes, the field would follow the leading car, until the release set them free again. Eric Debard (#81) was in the Top 11 Pro-AM, just head of Jean-Luc Beaubelique (#87) in the category, who had made a good climb of 12 places. Mauro Ricci (#61) P4 AM and Pascal Gibon (#53) in the Top 5. 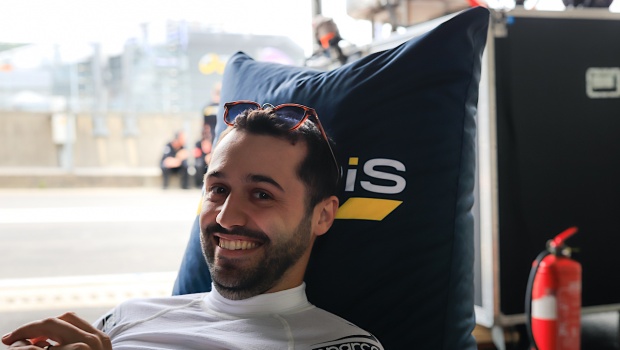 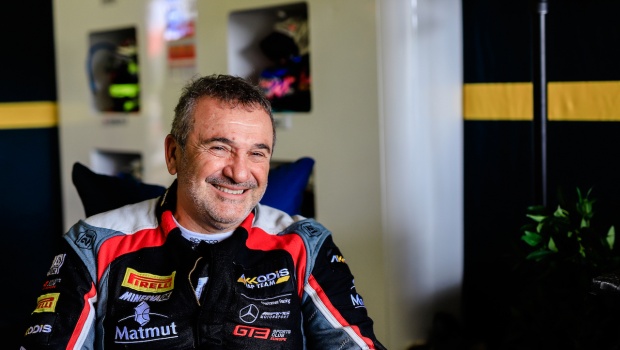 After the driver change, the pace picked up for Simon Gachet and Jim Pla who moved up as the laps went by, just as it did for Benjamin Ricci (P5 AM) and Pascal Gibon (#53). A few laps later, Christophe Bourret was going slow after a spin and a mechanical break. The driver of the #53 managed to get back to the pits but had to retire.

With ten minutes to go, another incident brought out another FCY which slowed down the Akkodis ASP Team drivers. Simon Gachet (#81) was P3 Pro-AM (P11 overall) and Jim Pla (#87) in the Top 10 of the category. Benjamin Ricci (#61), P4 AM was nearing the podium. 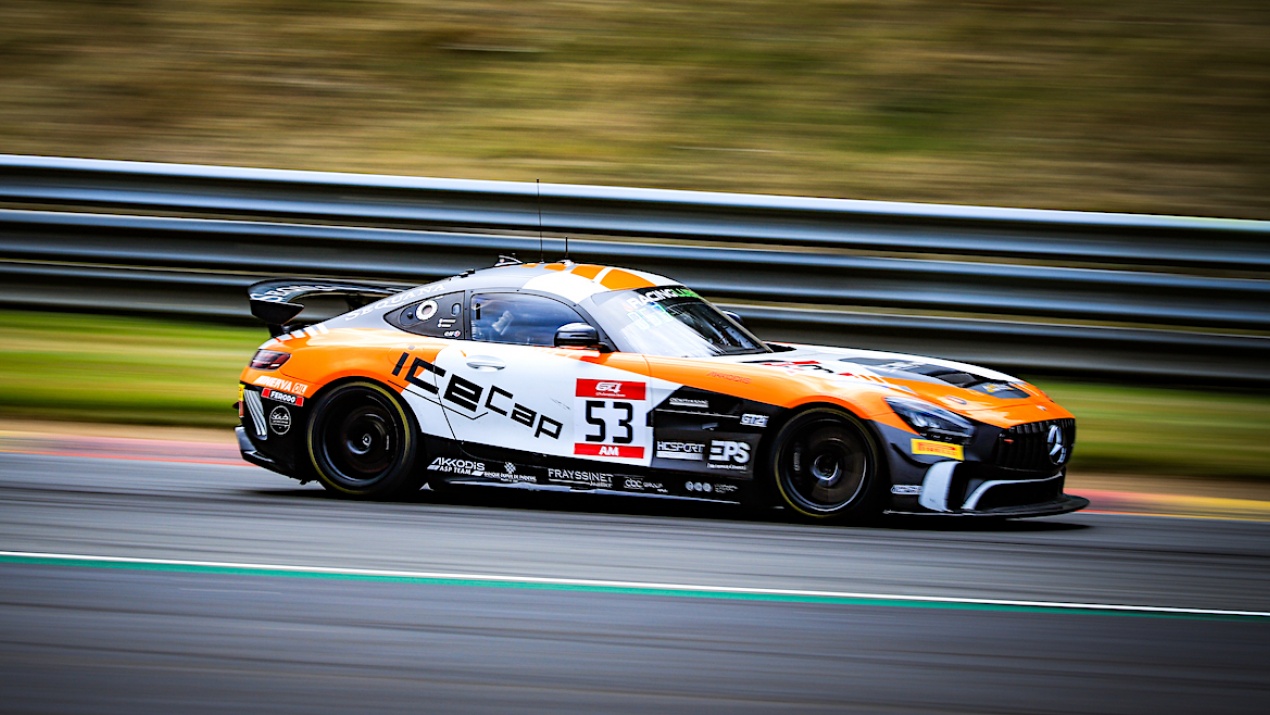 The restart took place with one lap to go. This final passage was intense and the fight was fierce. In the end, Simon Gachet (#81) crossed the line in P3 Pro-AM after having taken 29 places, and got a nice podium. Jim Pla (#87) finished in the points at P9 in category after a climb of 35 places. The duo of Pla-Beaubelique was still leading the championship with a 30 point lead. The weekend that had got off to a bad start didn’t end that badly after all. Lastly, it was a nice finish for Benjamin Ricci (#61) who gave the crew another AM podium and allowed the team to hold on to the lead of the category. 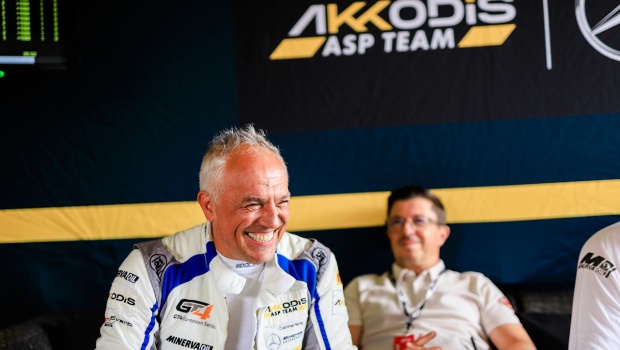 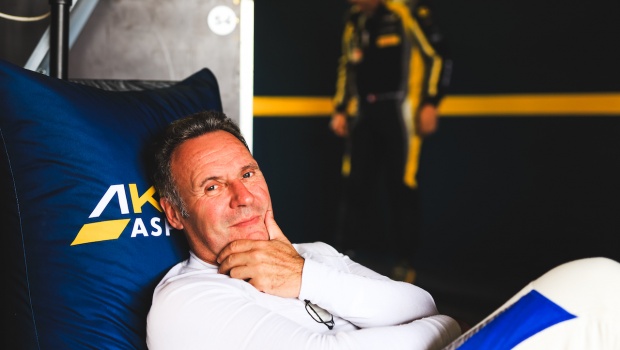 The weekend in the Ardennes is over but they already have to think about the next round, the penultimate round of the championship, which will take place in Germany, at the circuit of Hockenheim (3/4 September). 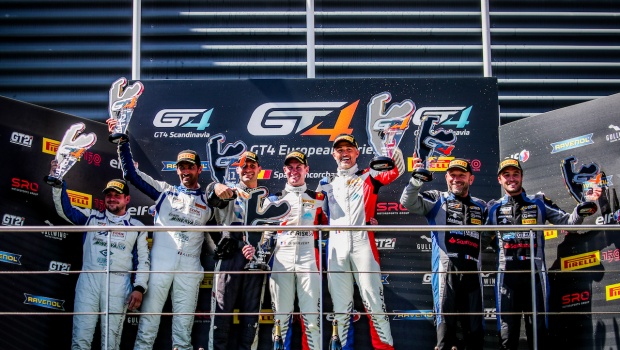 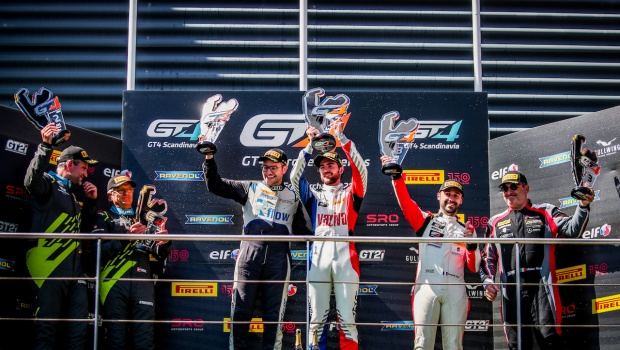