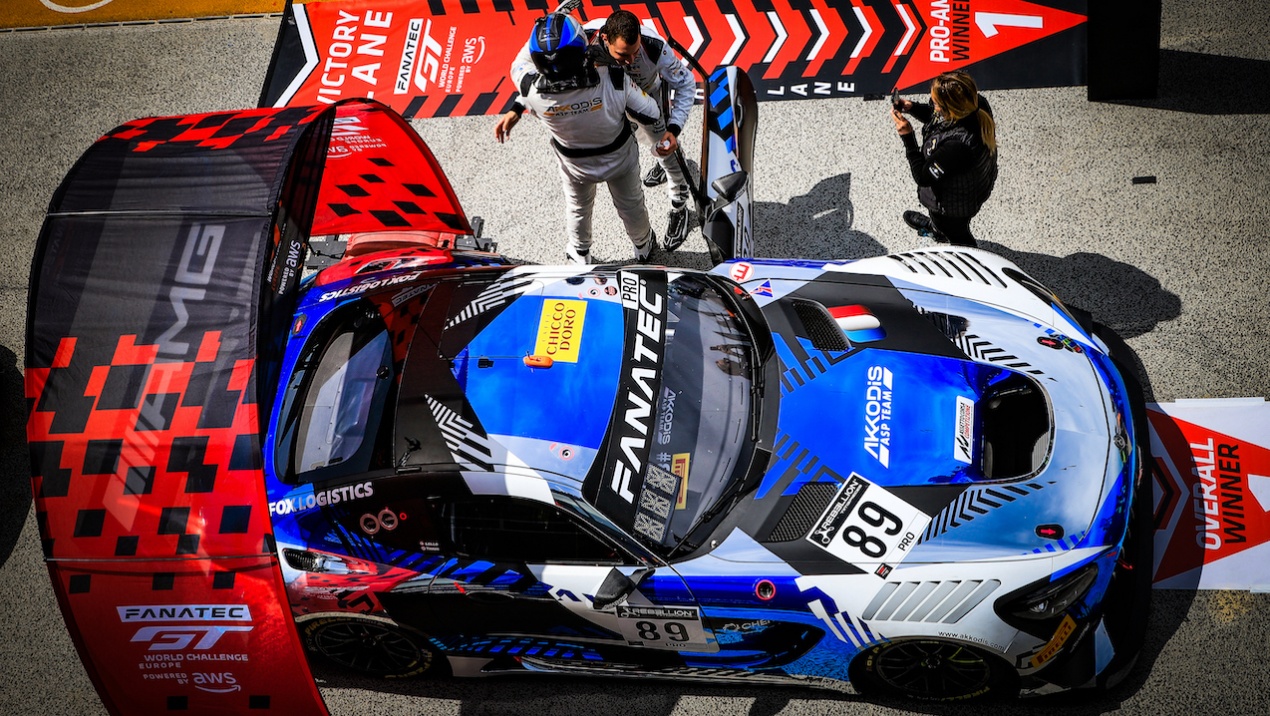 The third Sprint meeting of Fanatec GT World took place at the seaside resort of Zandvoort, favoured vacation spot for Amsterdammers. This layout, a very particular one, includes a 19% embankment (the one at Indianapolis is at 9%), and an important difference in altitude, and is situated right in the middle of the dunes, which results in a regular thin layer of sand regularly covering the circuit, making it very tricky to drive on the asphalt. Zandvoort is very technical and demanding, and requires mastery and precision.

The pre-qualifying session confirmed their strength with the best time for Raffaele Marciello (#89) and 10th for Jim Pla (#88). Petru Umbrarescu (#86) and Casper Stevenson (#87) were respectively P6 and P7 Silver. 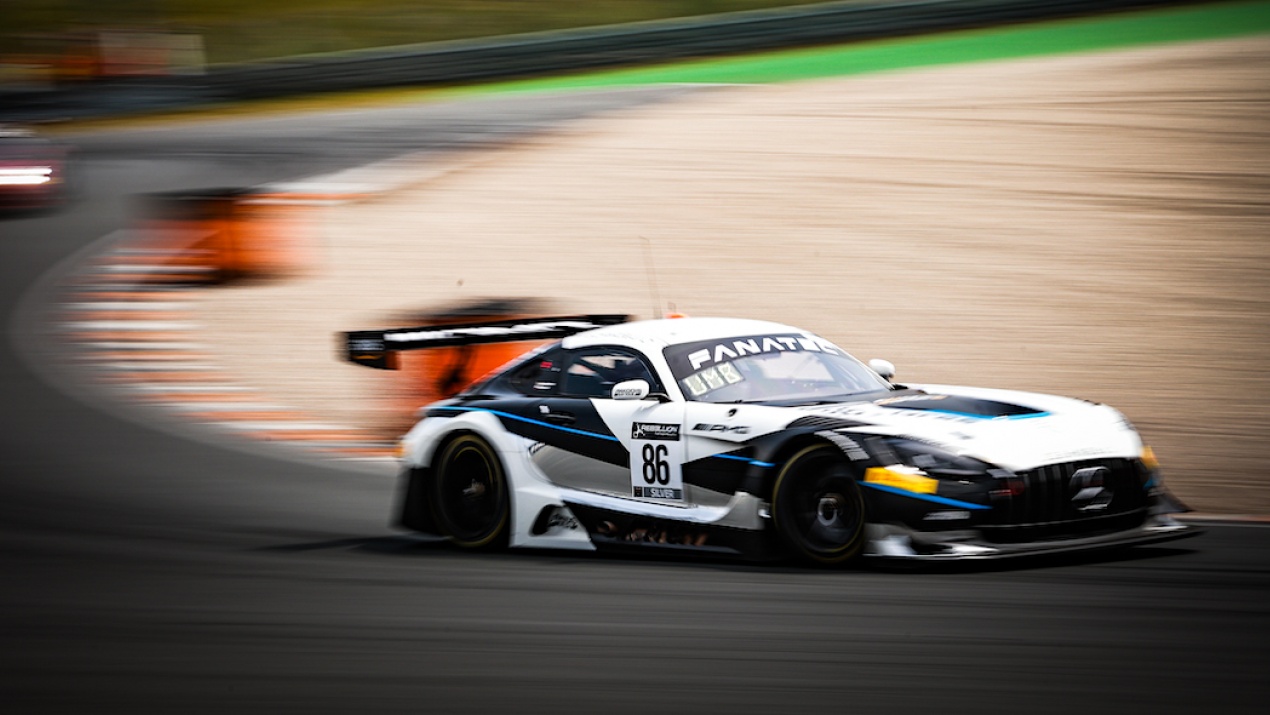 The first qualifying session took place Saturday morning with a temperature of 21°C. The fresh northern wind lowered the temperature but there wasn’t a threat from the skies. The 25 cars on track were ready to fight and the gaps were very small (16 cars in the same second).

Jules Gounon (#88) was the quickest for the Team, getting the 5th best time. A bit further back than in the first practice sessions, Timur Boguslavskiy (#89) could not to better than P14. In the Silver category, Igor Walilko (#86) set a wonderful second place in the category (P7 overall) and Casper Stevenson (#87) was fourth, in the overall Top 10.

The next day, the weather had changed again. The temperature fell to 13°C and a few drops of rain appeared which caused the track to be declared wet. Meanwhile, the line remained dry and all the drivers were on slicks.

Without hesitation, Raffaele Marciello (#89) got off to a great start and set an impressive time of 1:32.093, relegating his opponents to more than a half-second, he would not be beaten. The Swiss set his 11th pole position, 3rd this season. Despite the traffic, Jim Pla (#88) made the most of the track and finished the session P8. In the Silver Cup, Thomas Drouet (#87) was P4 in the category and would start from the 9th row, while Petru Umbrarescu (#86), who lost laps due to not respecting the track limits, was P8 Silver (12th row of the grid). 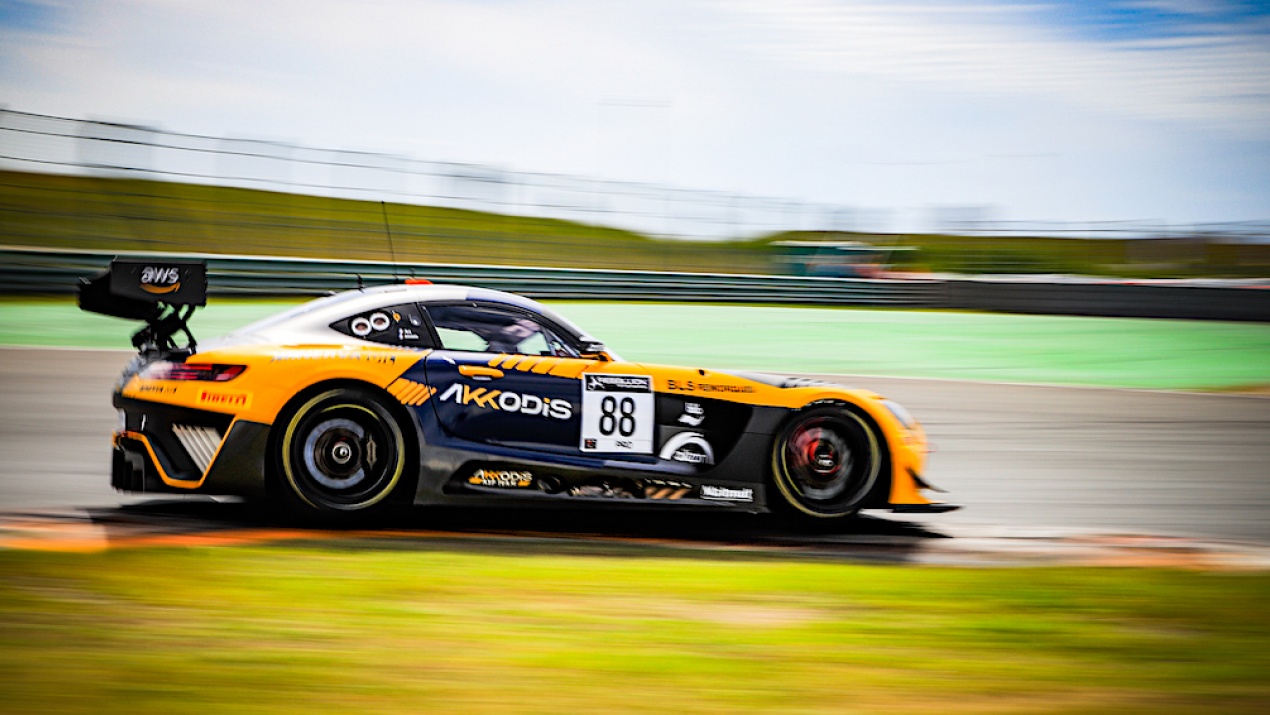 Saturday afternoon, far away from the heatwave that struck most of France, the first race of the weekend took place with a temperature of 25°C. The 25 cars were at the start for 60 minutes of high intensity racing…

As the lights went green, Jules Gounon (#88) was particularly efficient and aggressive, jumping from 5th to 3rd position. Second in Silver (P7 overall), Igor Walilko (#86) held onto his place, while Casper Stevenson (#87) and Timur Boguslavskiy (#89) lost two places each, respectively P12 and P16.

During the first ten minutes, the pace was set, the fight was on in all aspects of the game. Timur Boguslavskiy was even at the origin of a contact with the #33 that cost the #89 30s of penalty for after the race.

The laps went by and the pace did not let up, notably for the lead trio who, little by little, widened the gap to the rest of the pack.

When the pit stop window opened, Timur was the first to head back to the pits to hand over to Raffaele Marciello (#89). In the lead, Jules Gounon in the #88 (P3) and the #53 (P2) stopped at the same time, while the race leader (#32) made another lap. The Akkodis ASP Team mechanics made the difference by performing the shortest pit stop, allowing Jim Pla (#88) to head back on track in second place.

In Silver, Thomas Drouet followed Casper Stevenson (#87) and at the end of another very efficient pit stop, jumped up in the classification, from 13th to 8th place (P4 Silver). After a solid relay at a steady pace, Igor Walilko handed the wheel over to Petru Umbrarescu, P3 in the category (P7 overall). 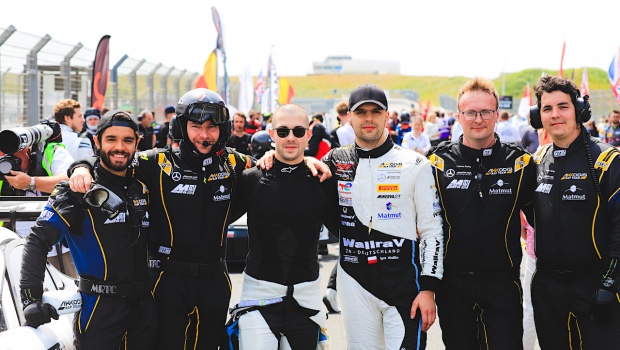 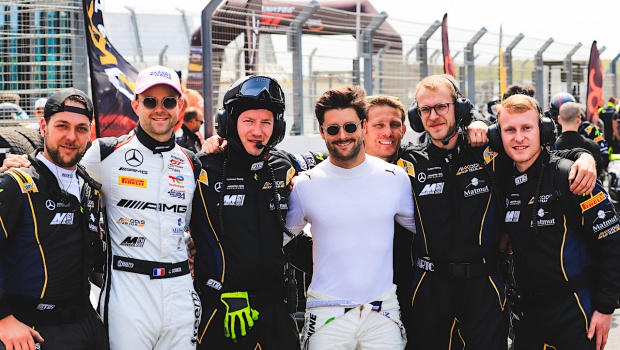 Lello Marciello (#89) championship leader (with Timur) upped the tone, determined to finish this quite chaotic race in the points. Having climbed up to P12, the Swiss was in attack mode. At the front, Jim Pla (#88) kept in contact with the leader.

With 23’ to go, a Full Course Yellow, followed by a safety car, neutralised the race. The gaps disappeared and at the restart, less than 15’ from the finish, everything had to be redone. The leader got away, followed by Jim Pla, who once again didn’t delay in setting some space with 3rd place. This ultimate sprint also relaunched the race at the heart of the field. Lello Marciello, having returned to the Top 10, did not hold back and was doing his all to win every single point, setting the best lap time as he went. Thomas Drouet (#87) saw the Silver category podium taking shape, now running P3 (P8 overall). Attacked on all parts, Petru Umbrarescu (#86), P4 Silver (P11 overall) ended up in a bad position, implicated in a contact with the #111.

With 8’ to go, Raffaele Marciello saw all his efforts fade away following a puncture in the front right tyre, which forced him to go back to the pits. The #89 crossed the flag in P23, position that won’t change even with the 30s penalty. For the first time, the #89 did not finish on the podium, did not get any points, and as a consequence, lost the lead of the championship (now in P2). 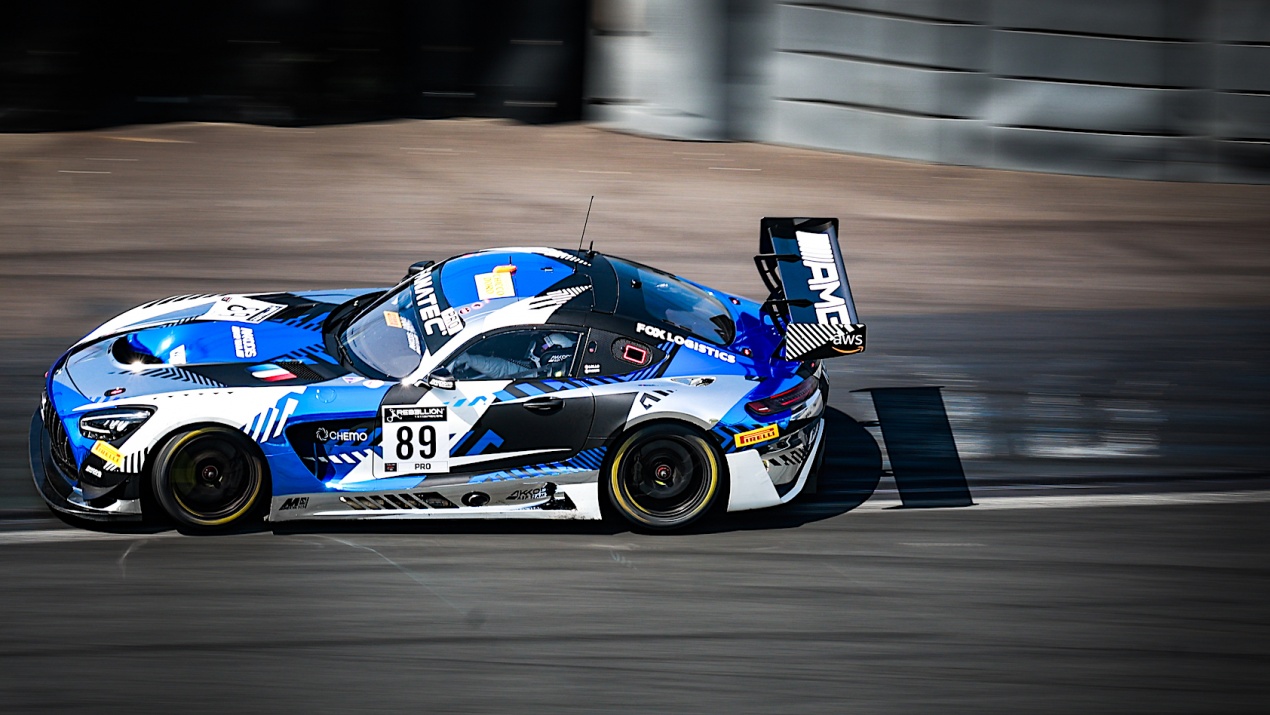 Finishing a race without incident and keeping up a good pace, Jim Pla crossed the finish line in second, allowing him to climb to 3rd place in the championship.

In the Silver category, Thomas Drouet did not let down his guard, which allowed the #87 to climb on the podium once more. Crossing the flag P3 in the category, the crew would be reclassified P2 after a penalty of 10s was given to the #99. In the championship classification, the duo is in P3, 1.5 points from second place.

However, the end of the race wasn’t as smooth for the #86. Petru Umbrarescu finished P5 Silver (P13 overall), but then received a 30s penalty after the arrival for having been the cause of the incident with the #111, and fell back to P21 (P8 Silver).

With two new podiums, Akkodis ASP Team held onto their position as leader of the Teams championship. 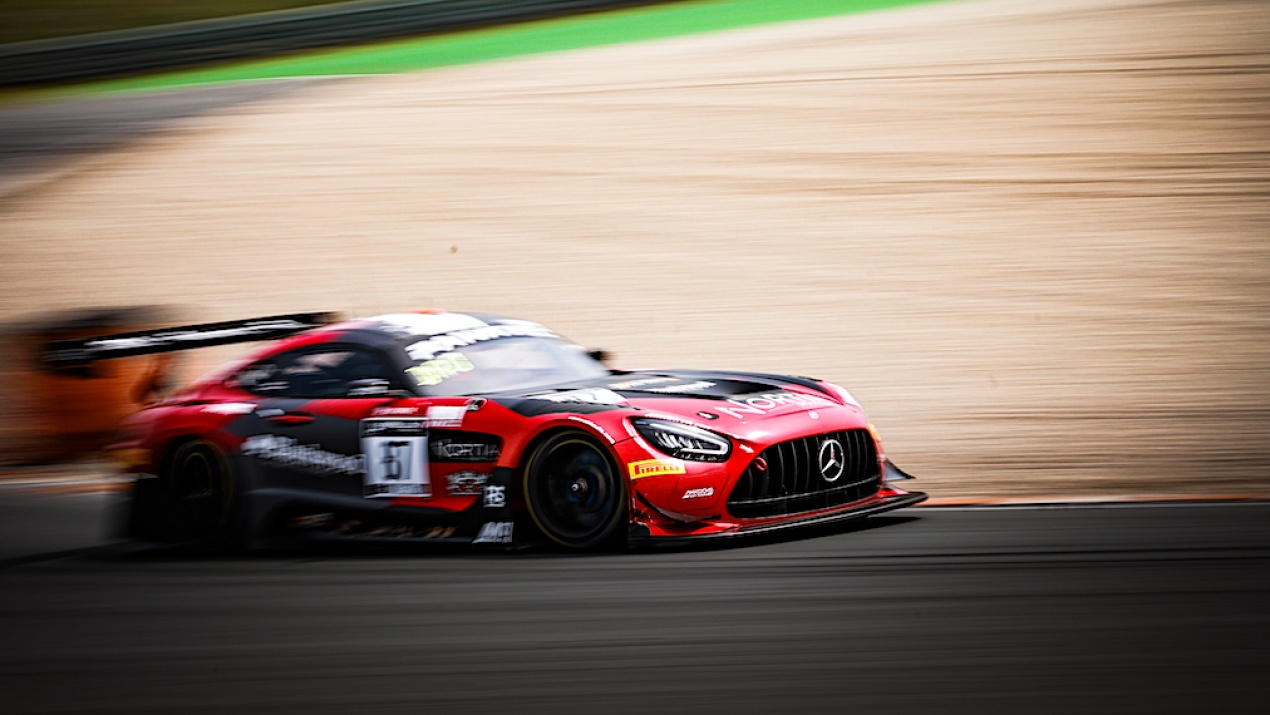 Race 2 – Third victory on the board!

Starting from pole, Raffaele Marciello (#89) had one goal – extend the gap at the head of the race. No sooner said than done for the Swiss who quickly took off (6s after 10’). Jim Pla didn’t hold back either and took back a position (P7). Thomas Drouet (#87) had less luck, as he swerved at the end of the straight and suffered a contact that sent him into a spin, forcing him to head off again in last place. Opportunistic in this mess, Petru Umbrarescu (#86) managed to jump positions by going from 24th to 18th place, P5 Silver.

With 35’ to go, Lello had a 10s lead on the pack, running as regular as a metronome. Jim Pla (#88) was the first to head to the pits to change driver and, just as the day before, the mechanics worked wonders. Jules Gounon headed back on track P4.

Igor Walilko (#86) found himself in P4 Silver and Casper Stevenson (#87) P7. When it was time to hand over to Timur Boguslavskiy, Marciello had a lead of 17s. Timur rejoined in the lead but his gap was closing fast. With 22’ to go, a safety car came to disrupt the gap that was left and reduced it to nothing. When they restarted, there was still 13’ of racing to go. 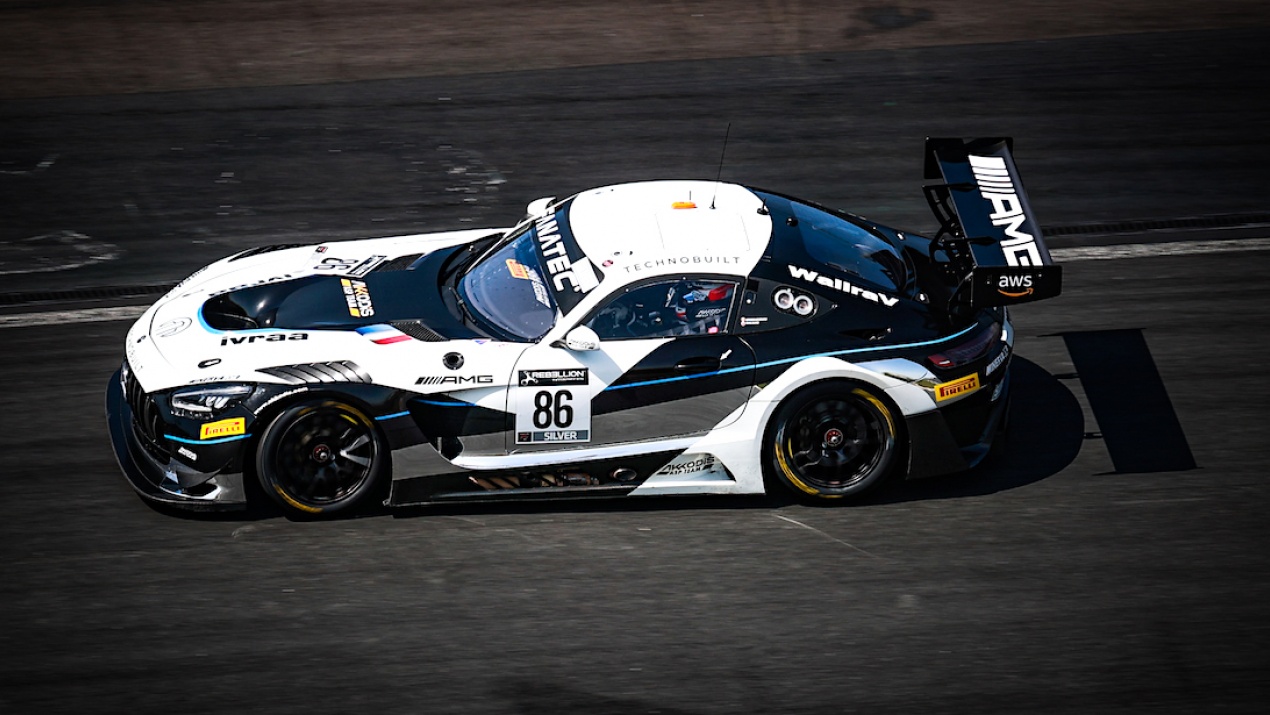 While Timur Boguslavskiy (#89) upped the rhythm, his level of performance allowed him to keep the #32 at bay. Without letting up, Timur lined up excellent lap times that allowed him to cross the line in the lead and claim the third victory of the Sprint season for the #89. Right to the end, Jules Gounon (#88) fought for the third step on the podium (and set the best race lap), and was even under threat from the #112 for a time, but that didn’t come to anything.

In the Silver Cup, after strong fights Igor Walilko (#86) crossed the finish line in the Top 5 Silver (P12 overall), just ahead of his teammate Casper Stevenson (#87). The young British driver delivered a brilliant and combative stint allowing him to gain positions and to take the chequered flag P14.

Cherry on the cake, Akkodis ASP Team once more won a superb victory in the pit-stop challenge. 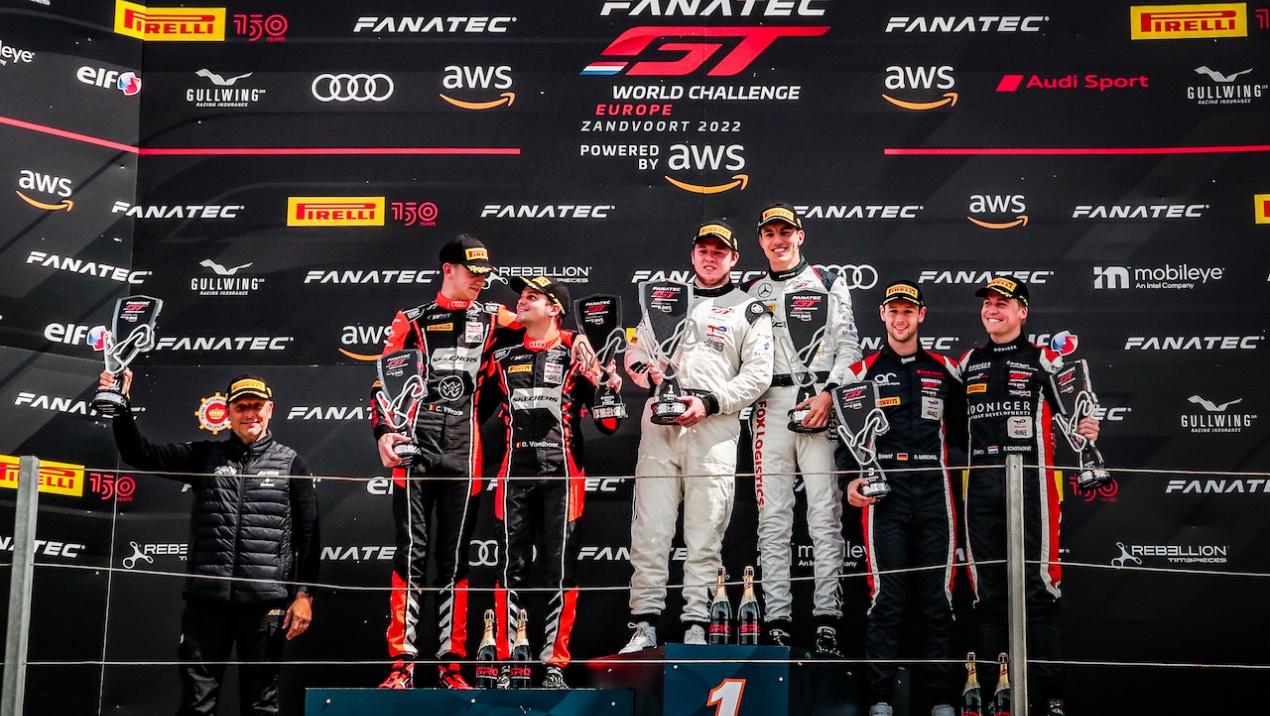 In the overall classification for the Sprint Cup drivers, Raffaele Marciello and Timur Boguslavskiy are sitting in second place, just 0.5 off the leaders…Jim Pla is third and Jules Gounon fifth. In the Silver Cup classification, Thomas Drouet and Casper Stevenson are third, and the pair of Igor Walilko and Petru Umbrarescu are seventh.

Next Sprint rendez-vous will be in two weeks (2nd/3rd July) at Misano. 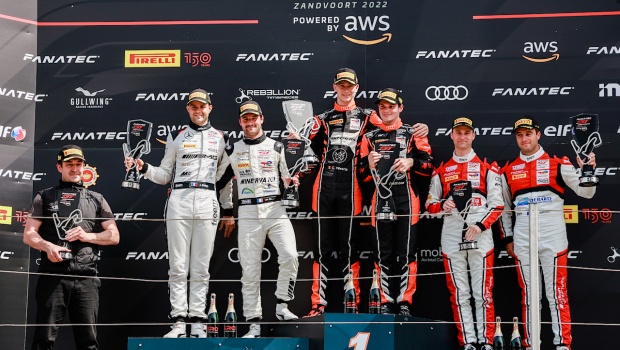 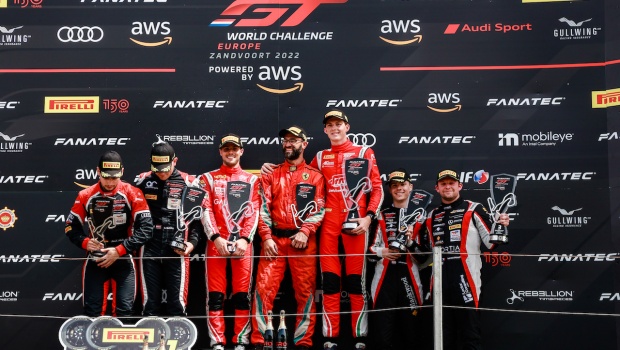