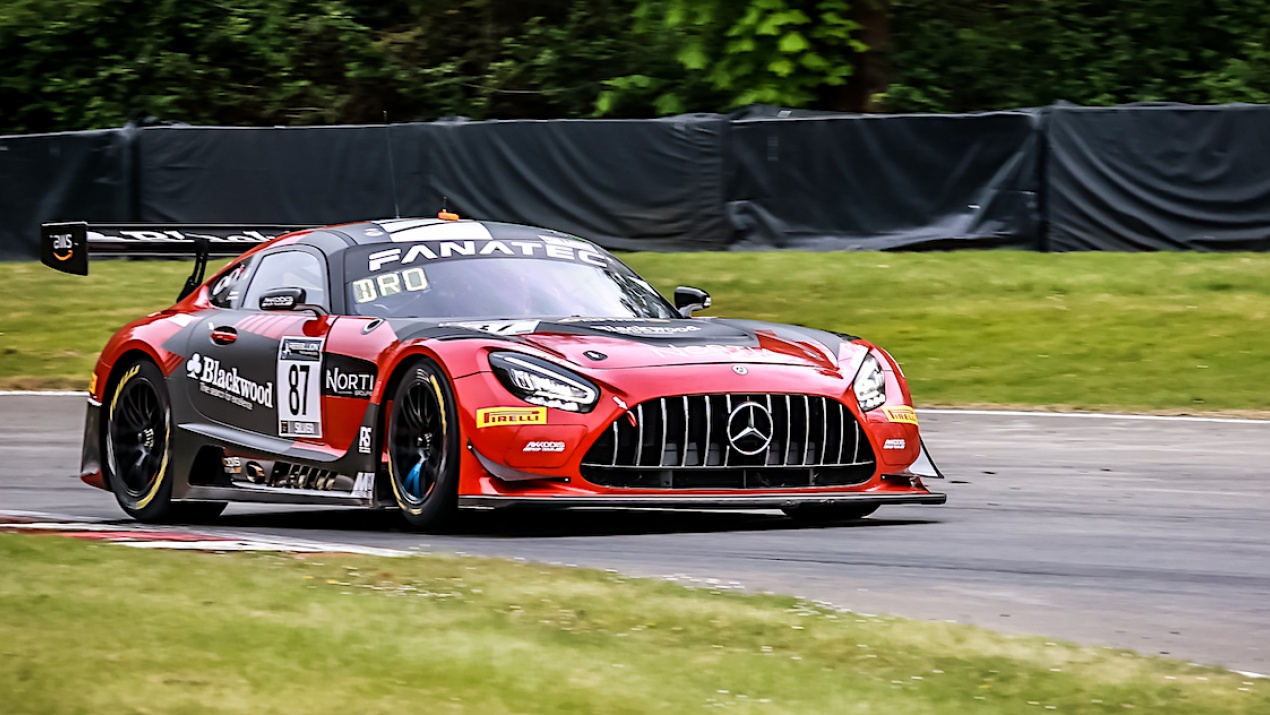 As of the free practice sessions, the Akkodis ASP Team showed off their ambitions and level of performance by setting the three best times. Raffaele Marciello (#89), paired with Timur Boguslavskiy, set the tone by setting the best lap in 1m22.037s, just ahead of his teammates, Jules Gounon (#88) by 0,198s, and Thomas Drouet (#87), who was leading the Silver Cup with 1m22.319s, while Petru Umbrarescu and Igor Walilko (#86) placed themselves in the Top 5 of the same category.

During the Pre-qualifying session, twice interrupted due to red flags, Raffaele Marciello (#89) proved he was the man to beat with a new best time of 1m21.889s. The most eager to contest his domination was still his teammate, Jules Gounon (#88), paired with Jim Pla, at 0.215s off Lello. In the Top 4 of the Silver Cup, Thomas Drouet and Casper Stevenson (#87) were P13 overall, whereas Petru Umbrarescu and Igor Walilko were P5 in the category (P16 overall) abord the #86. 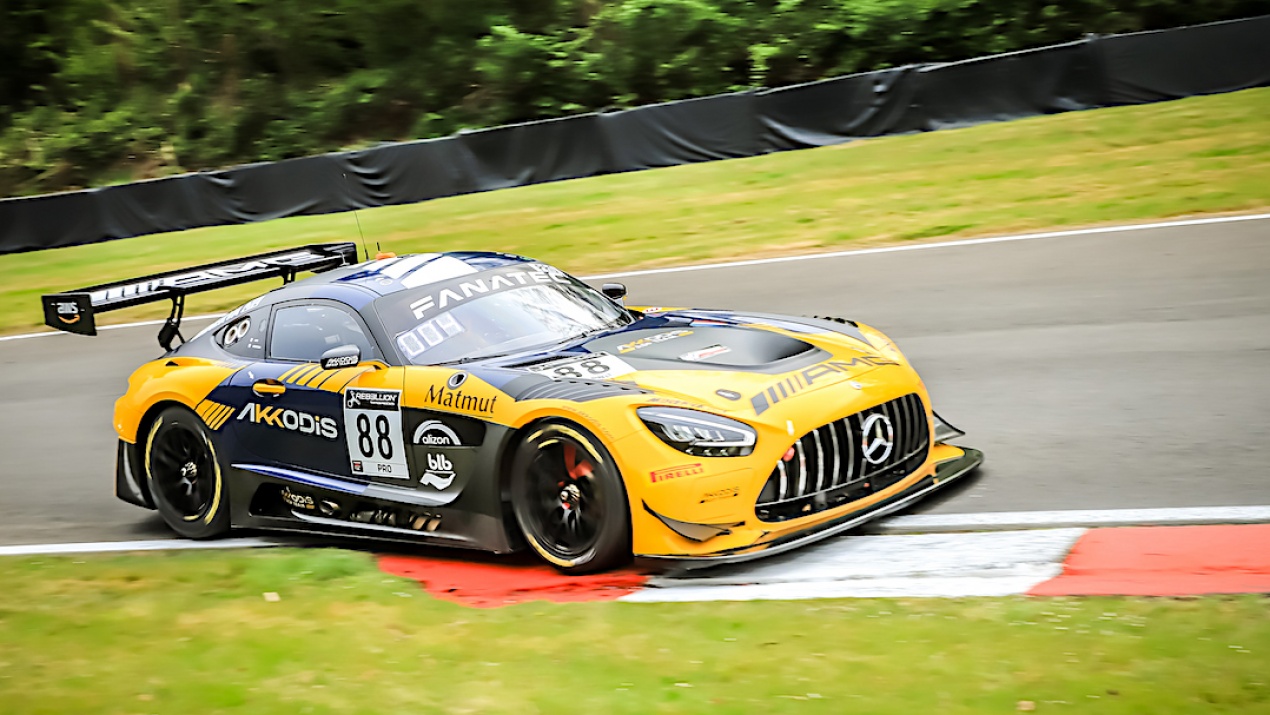 In this compact weekend (held over two days), the Qualifying sessions marked the close of a busy Saturday. Weather-wise, the skies were clear and the sun was shining, in front of a crowd of spectators, happy to renew their acquaintance with the joys of "made in England" motorsport. On track, there was fierce competition during Q1. Jules Gounon (#88) managed to claim second place, while Timur Boguslavskiy (#89) set himself on the second row of the grid (P4). Thomas Drouet (#87) entered in the Top 3 of the Silver Cup (P10 overall), while Igor Walilko (#86) managed to get on the 6th row (P5 Silver), a position which would get modified after suffering a penalty for improving under yellows (so he would start from the 8th row).

In Q2, Lello Marciello was clearly the favourite to take pole. But nothing is ever set in stone, and the Akkodis ASP Team driver had a big scare… He went very wide at Paddock Hill Bend, the #89 drifting and grazing the trackside guardrail. After heading to the pits to check the state of the car, Lello headed back out to chase down a good time and claimed pole by setting a lap of 1m21.370s. Jim Pla also set a very quick lap and placed the #88 on the 3rd row of the grid for Race 2 (P5). Casper Stevenson (#87), the team’s local lad, at ease on the track he knows well, set the second time in the Silver Cup (P12 overall), while Petru Umbrarescu (#86) was P5 in the category. 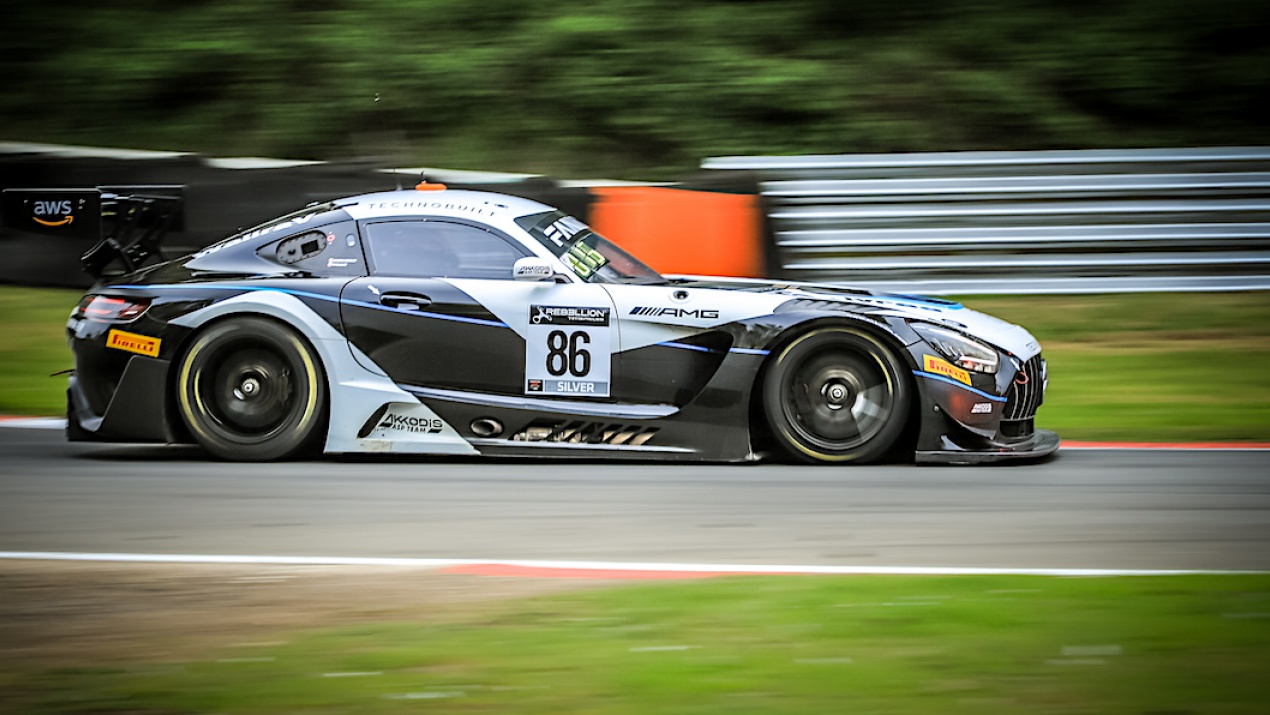 Race 1: Two podiums to start off with

Under a slightly overcast sky, the first race promised to be lively. As of the first few metres, the prediction came true and a collision sent three cars onto the grass in the first corner. Jules Gounon (#88) who started from second position on the grid managed to keep hold of his position without any issues, but Timur Boguslavskiy fell back a place (P5) and Thomas Drouet (#87) was still P3 Silver (P10 overall). Igor Walilko (#86) however suffered quite a bit during this turbulent start. In fact, by just going onto the grass, the Mercedes-AMG slipped and hit an Audi, causing a chain-reaction of cars going off track. The #86 received a 10 second stop and go penalty a few minutes later for having been the cause of this incident.

In order to clear the track, the safety-car neutralised the race for 13’. The restart was given and, from second place, Jules Gounon went on the attack, setting quick lap times. When the driver change window opened, Timur Boguslavskiy was the first to head to the pits, handing the #89 over to Lello Marciello. Casper Stevenson got behind the wheel of the #87 and Petru Umbrarescu in the #86. The pitstop of the #87 was the quickest of the whole field. On track until the last minute and now leading, Jules Gounon (#88) spared no effort to widen the gap. Meanwhile, Raffaele Marciello (#89) smashed the lap times to set the best race lap of 1:22.557.

While the #88 was in the pits and Jim Pla was behind the wheel, the left rear wheel blocked and they lost precious seconds. Jim Pla (#88) headed back on track third, just ahead of Raffaele Marciello (#89), who overtook him a few hundred metres later.

In the last 20 minutes of the race, and despite the degradation of the cars (and the tyres), the positions were fixed. Despite all his efforts and dexterity, Lello Marciello (#89) crossed the line P3 overall, right behind the #32 Audi and just ahead of his teammate, Jim Pla (#88). With the consistency of a metronome and completing the work started by Thomas Drouet, Casper Stevenson (#87) finished second in the Silver Cup, with a very nice 8th place overall. Petru Umbrarescu (#86) ended in P7 Silver (P20 overall). With two podiums to start the season, Akkodis ASP Team has entered the competition. 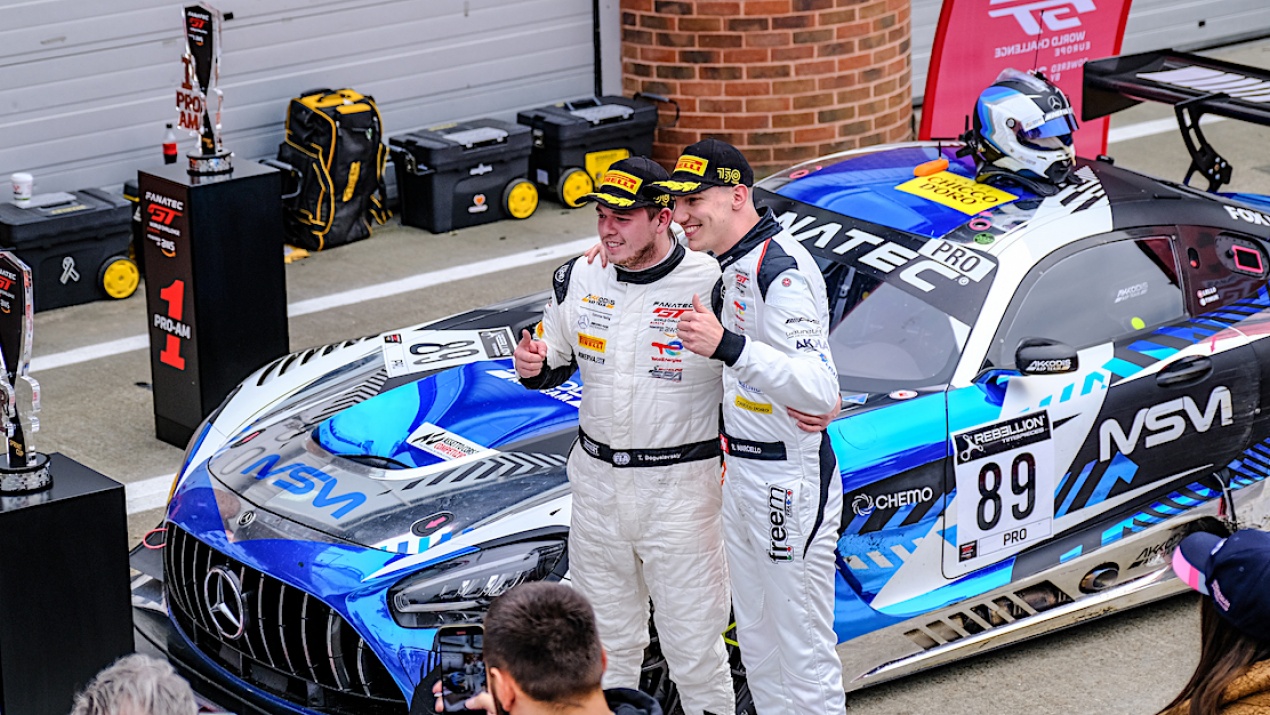 The start of the second race of the event took place at the end of the afternoon following a rather particular protocol. In fact, despite the fact that it wasn’t raining, the track was relatively humid and the 25 competitors started with two formation laps behind the safety car (the race time had started) before being released.

In pole position, Raffaele Marciello (#89) succeeded his start and held onto his advantage in ‘full attack’ mode. Very quickly, the Akkodis ASP Team driver widened the gap and lined up the best race laps (the best in 1:22.901). From the 3rd row, Jim Pla (#88) managed to gain a place (P4), while Casper Stevenson (#87) held onto second place in Silver (P13). Petru Umbrarescu (#86), initially on the 10th row (P6 Silver) was pulled back three places on the grid following the incident in the first race (loss of ‘good conduct’ points).

The laps went by for Lello Marciello (#89) who increased his gap by one second each lap. In less than 20 minutes, he already had a lead of nearly 10 seconds.

When it came time to change drivers, Jim Pla, then P4, came in and handed over the #88 to Jules Gounon who headed out, champing at the bit. Casper Stevenson (#87) gave way to Thomas Drouet two laps later, followed by Petru Umbrarescu replaced by Igor Walilko in the #86.

With a 17s lead on his adversaries, Raffaele Marciello was the last to rejoin the pits. Timur Boguslavskiy headed back on track with a 9s lead, a capital that the Akkodis ASP Team driver managed to perfection, with the accuracy of a metronome.

In the pack, the fight went on. Jules Gounon, then P3, increased the pace and put the #32 Audi under pressure to try to take second place. Thomas Drouet, still P2 Silver (P10 overall) and Igor Walilko, in the Top 5 of the category (P15 overall) weren’t holding back either.

With just 10 minutes left, Thomas Drouet accidentally hit the rear of the #33 Audi who took off into a spin. The incident between the two cars was placed under investigation.

In the end, Timur Boguslavskiy crossed the chequered flag as a magnificent winner, author of a perfect weekend where he shone as of the first practice session. For his 22nd birthday (celebrated Saturday) Timur really gave himself a nice gift. Of course, well done as well to his incredible teammate, Lello Marciello, an exceptional driver with an amazing spirit who took his 8th victory in the Sprint Cup (the 10th for Jérôme Policand’s Team). Icing on the cake – the crew of the #89 are also topping the championship with a 3 point lead.

It’s also worth mentioning the very good performance of Jules & Jim, I mean, the pair of Gounon-Pla, who climbed to the third step of the podium in Race 2 and are currently 4th in the provisional championship classification.

As for the Silver drivers, Thomas Drouet crossed the line in second place in the category (P9 overall) but received a five-second penalty for contact with the #33 and the #87 was classified third. Thanks to the two podiums of the day, the duo of Drouet-Stevenson is second in the championship (11 points from the leaders). Igor Walilko finished in the Silver Top 5 and heads into 6th place in the championship, along with Petru Umbrarescu.

The next round of the Sprint Cup will take place in two weeks (14/15 May) at the Magny-Cours circuit in France. There’s no doubt that it will be an exciting weekend! 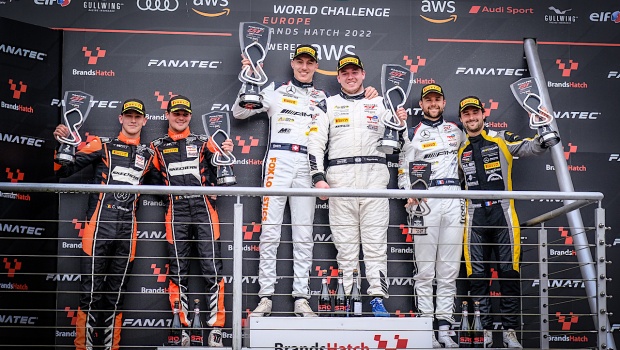 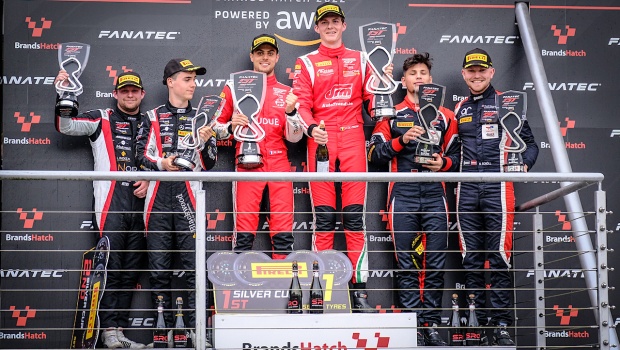