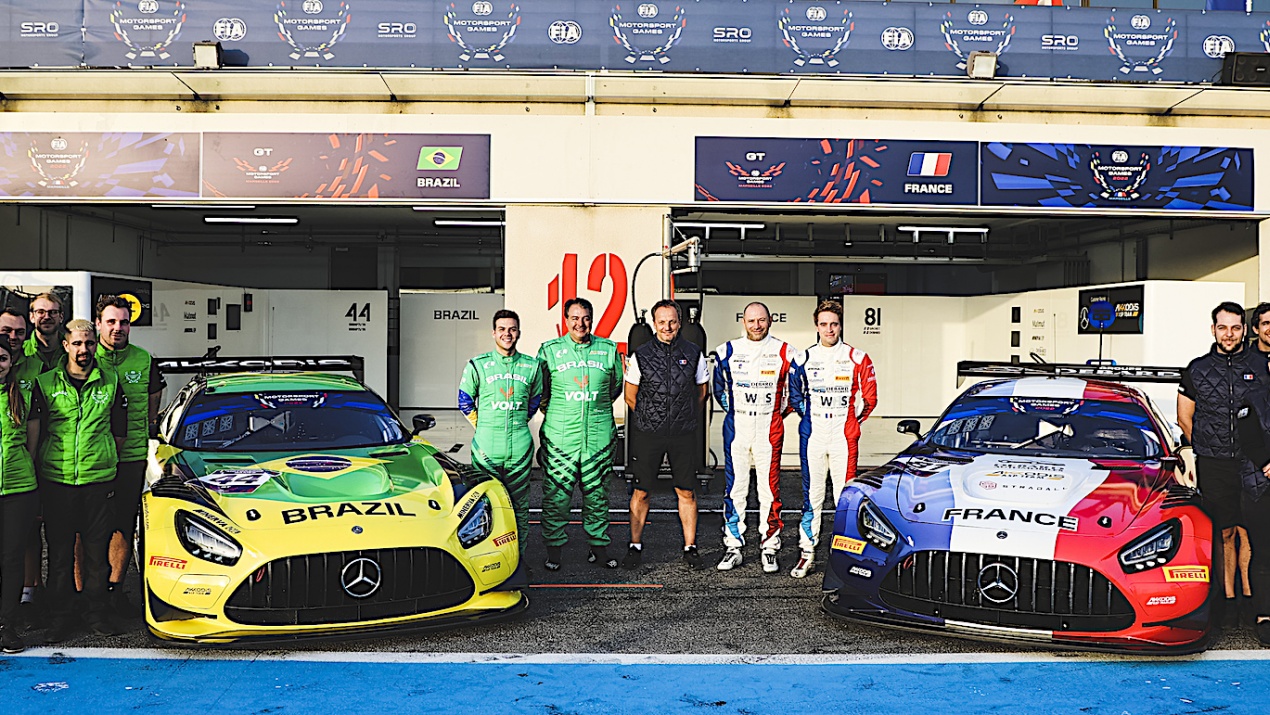 Practice: a pole to start with…

The competition was started with the free practice sessions on the 5,8km of the Paul Ricard Circuit, the host track of the Motorsport Games. France led for a big part of the first session, with Simon Gachet in very good form, sharing the #81 Mercedes-AMG with his usual teammate, Eric Debard. Very quickly, Germany becomes France’s main adversary. In the second session, it’s Simon Gachet’s turn to beat Fabien Schiller (who used to race for Akkodis ASP Team) by more than a half second. Brazil set the 6th time in FP1 and then finished 3rd in FP2 with Bruno Baptitsa in the #44 Mercedes-AMG.

Qualifying was made up of two 20-minute sessions, setting the grids of the two qualifying races. One driver from each nation would compete in a session, starting with the Bronze drivers, then the Silvers.

Leading for a good part of his session, Eric Debard finished 2nd, giving way to Valentin Pierburg (Team Germany) who took pole. In the second session, Simon Gachet set a great time of 2m01.817s shortly before the 10 minute mark, then nailed in pole.

For the Brazilian team, at the end of Q1, Adalberto Baptista placed the #44 in the Top 10, then his son Bruno set the 7th time in Q2. 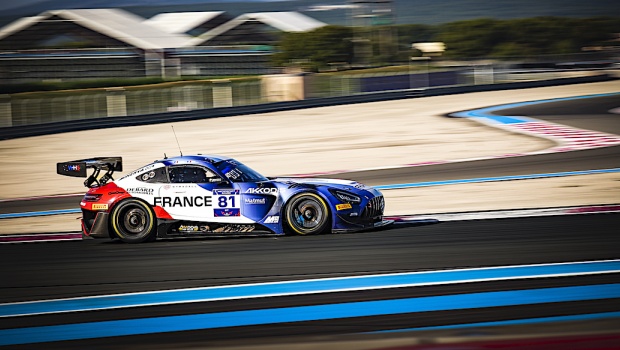 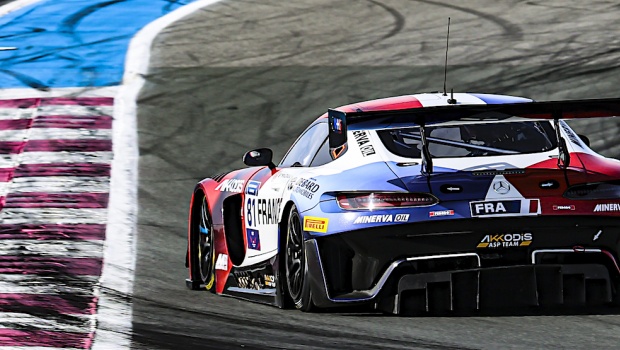 This first qualifying race could be summed up in one sentence – the first four cars to cross the finish line were the first four on the grid, but in between, there was quite a bit of shuffling on the track for the 60 minutes of racing. The start of the race was animated, and Team Germany managed to keep their advantage, Team UK jumped from third place to overtake Eric Debard. There was jostling in the field and Brazil did not let up to claim some places. After the driver change, Simon Gachet (#81) found himself quickly in the exhausts of Team UK and made the most of his perfect knowledge of the track to take the advantage. The France Team could not reach Team Germany but won a superb second place.

Starting from P10, Team Brazil crossed the line in P6. Adalberto then Bruno Baptista did not spare any effort to achieve a great climb up the field. 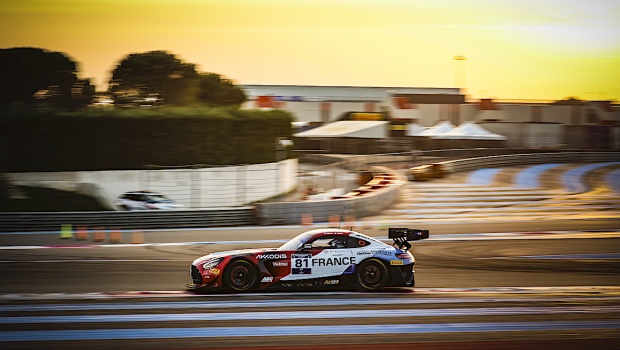 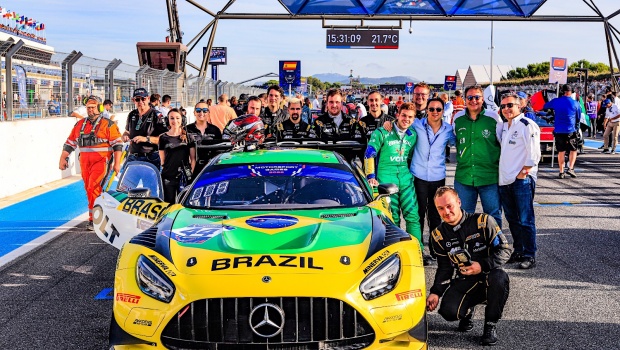 Qualifying race 2: a breath from victory

Starting from pole, Simon Gachet (Team France #81) led for the entirety of the first stint, even though Fabien Schiller was not far off in the #20 (Team Germany).

When it was time to change drivers, France increased their advantage while Simon Gachet stayed on track for two more laps than Fabien Schiller, which gave Eric Debard a six second lead, still at the front of the pack. But as the laps went by and despite a very impressive resistance while setting excellent lap times, Eric saw the Pierburg menace (#20) appear in the rear-view mirrors, and who overtook him with 7 minutes to go. Meanwhile, Eric Debard would not let up and ran a very aggressive end of the race, coming back on the #20 (getting a 5s penalty for not respecting the track limits). In the end, Pierburg stayed ahead of the #81. Germany and France would share the first row of the main race. 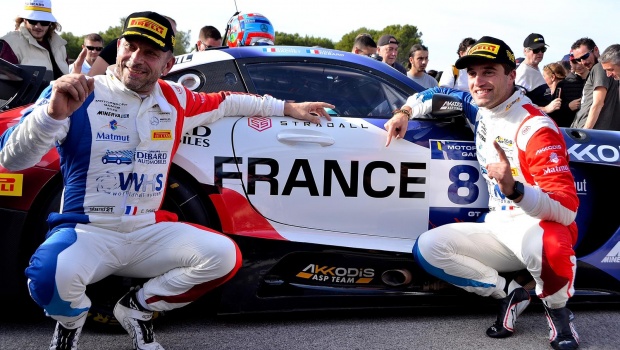 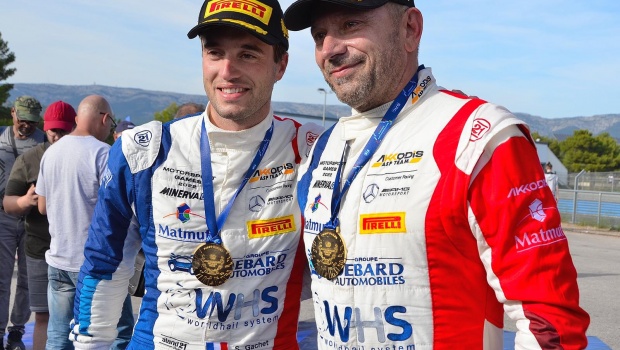 The 60 minutes of the race were quite hectic for team Brazil. After a collision at the beginning of the race with #25, Bruno Baptista was forced to head to the pits in slow motion a few minutes later, with a broken clutch. After the reparation, Adalberto headed back on track for the second part of the race, but a ‘very wide’ trajectory launched him off the track, damaging considerably his tyres. He had to return to the pits again…it was a race to forget… 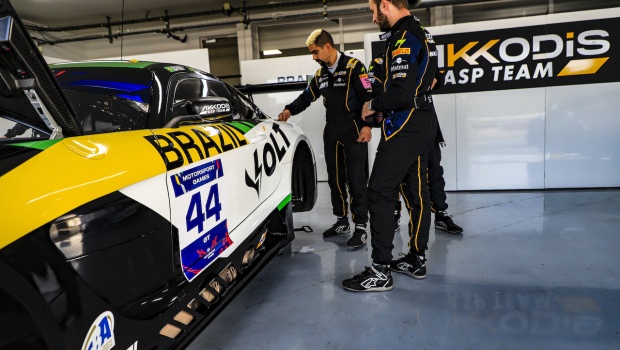 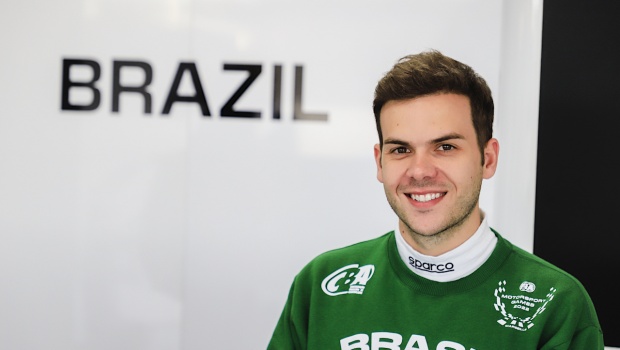 The Main Race: First step on the podium!

“The” race that determined the medallists in the discipline can be divided into two distinct phases. The teams can choose the driver of their choice to start (Bronze or Silver). Though most of the teams chose to start with their Bronze drivers (including Germany), France decided to make the opposite choice, hoping that Simon Gachet could get a decisive advantage by creating a gap at the front. And that is what happened. Simon Gachet instantly took the lead of the race and widened the gap from the first metres, just ahead of the Germans and Brazillians, while Bruno Baptista got off to a flying start, jumping from 8th to 3rd place in less than one lap.

Halfway though, after the driver change, Eric Debard had a 30 second lead, but Fabien Schiller was now at the wheel of the #20 and the gap shrunk bit by bit. Fabian Schiller set the best lap times, but Eric Debard was particularly efficient in slowing down the German driver’s comeback. 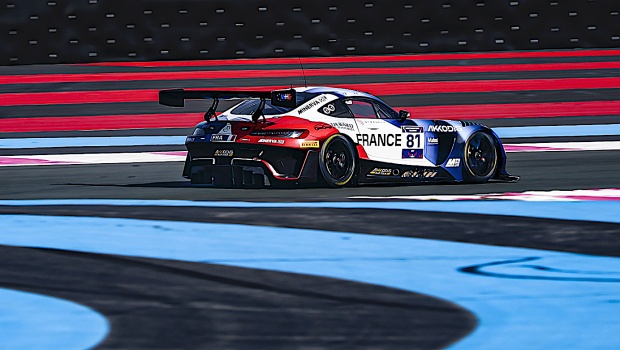 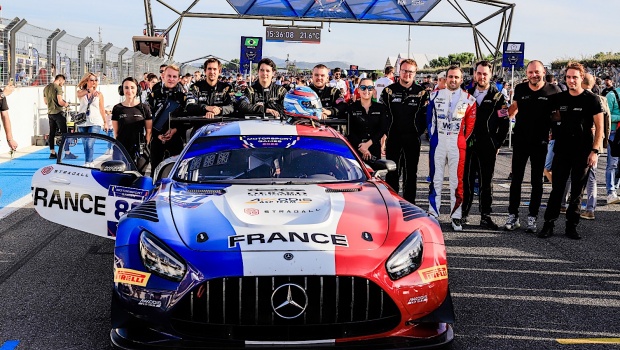 Everyone was prepared for a decisive confrontation in the last lap, but a safety car neutralised the race and allowed France to win ahead of Germany and the UK. The French team won the first gold medal of the 2022 FIA Motorsport Games, after having resisted the pressure from the favourites to win.

After a wonderful first stint, Team Brazil was settled in the Top 4, but had to concede a few places after a hit and a penalty. The #44 finished P9. 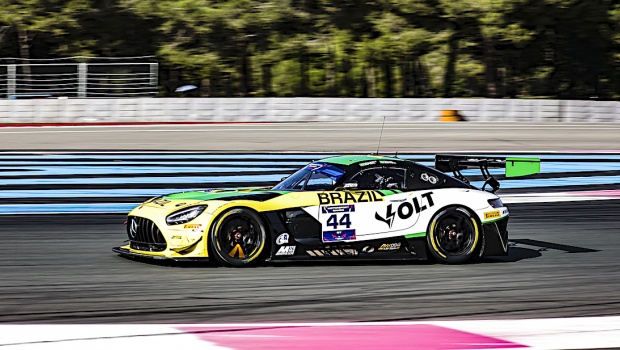 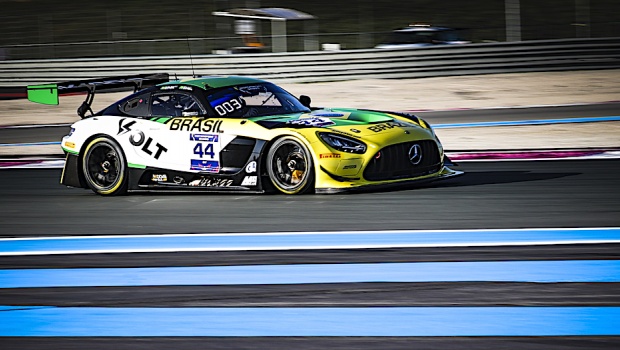 In the Sprint Cup, one car and one driver only is entered. Though Team France are using the same car, they’ve got a different driver. In fact it’s Tristan Vautier, Jérôme Policand’s sport godchild and also now a one-time resident of the team, who would defend the French colours. Entered in the US IMSA WeatherTech SportsCar championship (prototype), Tristan had to pick up some habits again to optimise his driving of the Mercedes-AMG GT3. For Team Brazil, Bruno Baptista took part, after having participated with his father in the GT Cup.

After free practice sessions dedicated to the final setups, where it was P4 and P7 for Tristan Vautier (#81) and P9 and P11 for Bruno Baptista (#44), the 20 minute qualifying session proceeded at a steady pace. Dries Vanthoor (Team Belgium) set the event’s lap record, and relegated Team Australia to second place. Tristan Vautier set the 6th best time in Team France’s #81 Mercedes-AMG, while Team Brazil was 8th. 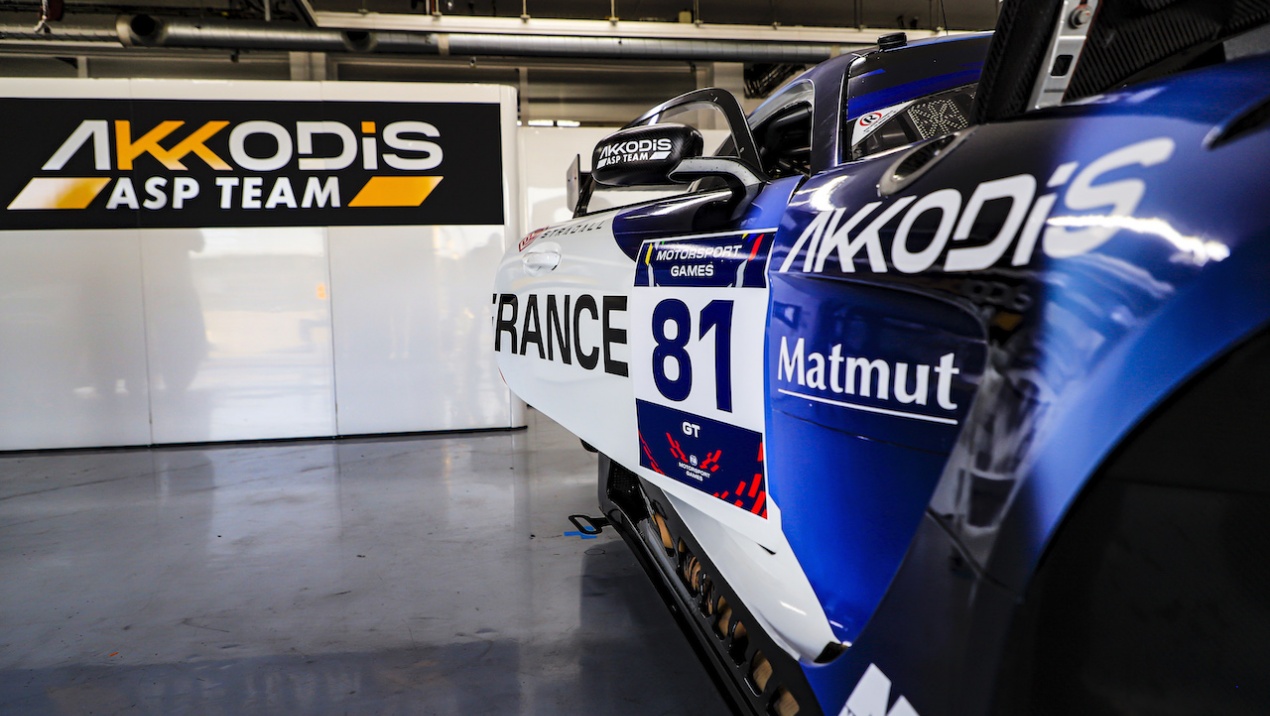 The single race of the discipline started in ideal weather conditions. From the start, the pace picked up and the protagonists showed what they were made of. Tristan Vautier managed to hold onto his sixth place, while Bruno Baptista was a bit jostled despite his good start, and fell to 12th place. As the laps went by, the rhythm didn’t decrease and the gaps widened. At the halfway mark, the situation was unchanged for Team France’s #81. Team Brazil’s #44 was now in the Top 10. The young Bruno Baptista usually runs in Stock Car Pro in Brazil and was discovering the GT3 for the first time this weekend. It was a great and promising start.

In the final fifteen minutes of the race, Team France (P6) was right behind Team Turkey and was fighting for 5th place with Morocco and Spain. Though Tristan was being more and more insistent on the Turkish driver who was acting a bit like a buffer, the Frenchman found himself under threat from the Moroccan driver. Bruno Baptista didn’t back down, fighting with Dani Juncadella for 8th place.

With just one lap to go, Team Morocco, more and more insistent (and a bit optimistic), clashed with team France. The Moroccan got a puncture, but Tristan managed to head away in P9. In the last turns, Bruno Baptista managed to overtake Dani Juncadella and crossed the finish line in sixth place. This very nice position gave him the title of best Silver driver. Tristan Vautier crossed the line P8. Team Australia won ahead of Italy and Belgium. Italy finished top of the medal board in this second edition of the 2022 FIA Motorsport Games. 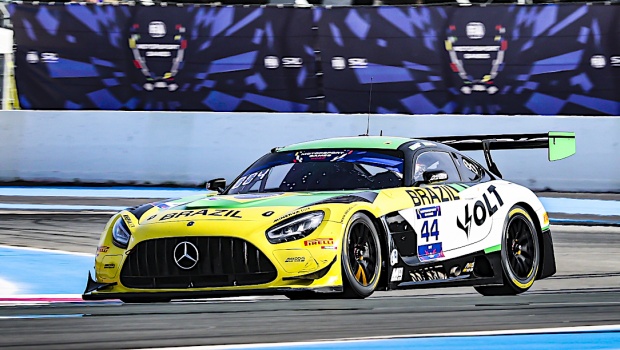 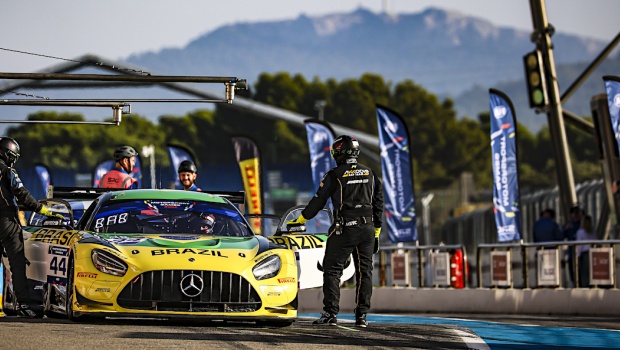